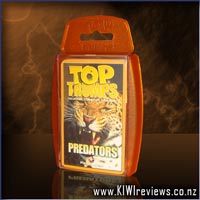 The deadliest, most efficient killing machines of the animal kingdom all get their moment of fame in this fascinating edition of Top Trumps. Predators rely on physical attributes that enable them to outrun, outfly, overpower, poison or overwhelm through sheer numbers to kill in order to survive. All except the deadliest killer of them all. Compare facts such as Height, Weight, Length, Speed & Killer Rating.

2 or more players can play. Players deal the cards amongst themselves and one player will read out a fact from their top card - the other players must openly compare the same fact. Whoever has the highest fact, wins the opponents cards. The winner will be the person who has all the cards at the end.

It has some funny pictures and some horrible pictures, and my favourite one is the man because he is the only person. The horrible picture is the hyena carrying the deer.
It is a fun game and I enjoyed playing predators because I enjoy being around animals. My favourite animal in the pack is either the King Cobra, Wild cat, Scorpion, the bears, the rattlesnake, cheetah and lion.

It's a classic deck, so don't expect great, astounding artwork, but for the fact that it is classic, it is still very well done. in many ways I think I prefer the classic decks for their ease of reading. The 'specials' sets can be a little OTT for my failing eyes. Too much staring into the magic window on top of my PC.

True there is no highly-polished feel about this deck, but with the same simple rules as all the other decks available, this is still as much fun as the rest... more so in fact because I don't spend half the game trying to decode some of the writing for my son, who is my usual co-player.

Overall, an excellent deck if you are playing with younger kids, but for the older player, it might be a bit bland... but if you are out camping and there's nothing else to do... this deck will do you just fine.

This is my kind of game. Ok, so I am a natural history nerd, and seeing stunning photographs of animals in all their natural glory just lights up my day.
As one might expect, the cat family make up the largest group of predators in the deck with seven animals. three canines, two bears, four insects, three fish (two of which are sharks), one whale, five reptiles, four birds and man.
Each photo contains a clear and stunning photo and a fascinating array of factual data, including the disputable 'killer rating', but then to be fair, I guess it is an arbitrary figure and just makes part of the game.

My daughter was in awe seeing each photo, and gasps of 'wow' punctuated every second of the game. I suspect it was me who was doing most of the gasping and 'wowing' throughout; it could have been my daughter too.

A great thumbs up to this game, this one really is my forte and my interest.

A classic set so the artwork isnt all that stunning but that makes it good and easy to read for the kids. The photos are pretty good quality, about what you would expect to see in a copy of national geo or on the discovery channel. Nice and easy to play and lots of fun. A great deck to use if you want to play a lot and a cool gift for the little ones.

Teeth, lots and lots of teeth is one way to describe this pack, but not all Predators have teeth as you will find out once you look at this pack. Admitedly there were one or two Predators in this deck that I hadn't thought of as Predators before, but once I thought about it, it made perfect sense. Once again some spectacular pictures on this deck really help bring it to life.

A dark silhouette appears at the end of the alley, and slowly moves toward you as you wait in silent anticipation. The figure is framed by the thin light managing to filter through the dark fog. The streets of Los Angeles are not a welcoming sight at this hour. You pull your hat a little lower, obscuring your appearance from this anonymous informant. He may be on your side, but you aren't taking any chances with a murderer on the loose. You ... more...