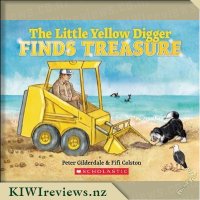 Disclosure StatementFULL DISCLOSURE: A number of units of this product have, at some time, been supplied to KIWIreviews by Scholastic (NZ) or their agents for the purposes of unbiased, independent reviews. No fee was accepted by KIWIreviews or the reviewers themselves - these are genuine, unpaid consumer reviews.
Available:
October 2022

"We followed as the digger rumbled down towards the truck,
and watched it start the digging to get the truck unstuck."

"THUNK?!
The driver's dog (called Charlie) had heard that funny sound.
He dived into the hole to dig... just look at what he found!
Buried right below the place the truck had come to rest,
there was the top (just showing) of a rather rusty chest."

The Little Yellow Digger is back and this time it's at the seaside. After the digger rescues a truck stuck on a beach, Charlie the dog excitedly uncovers something else buried in the sand. Further investigation reveals what looks like a treasure chest... but who knows what is inside... 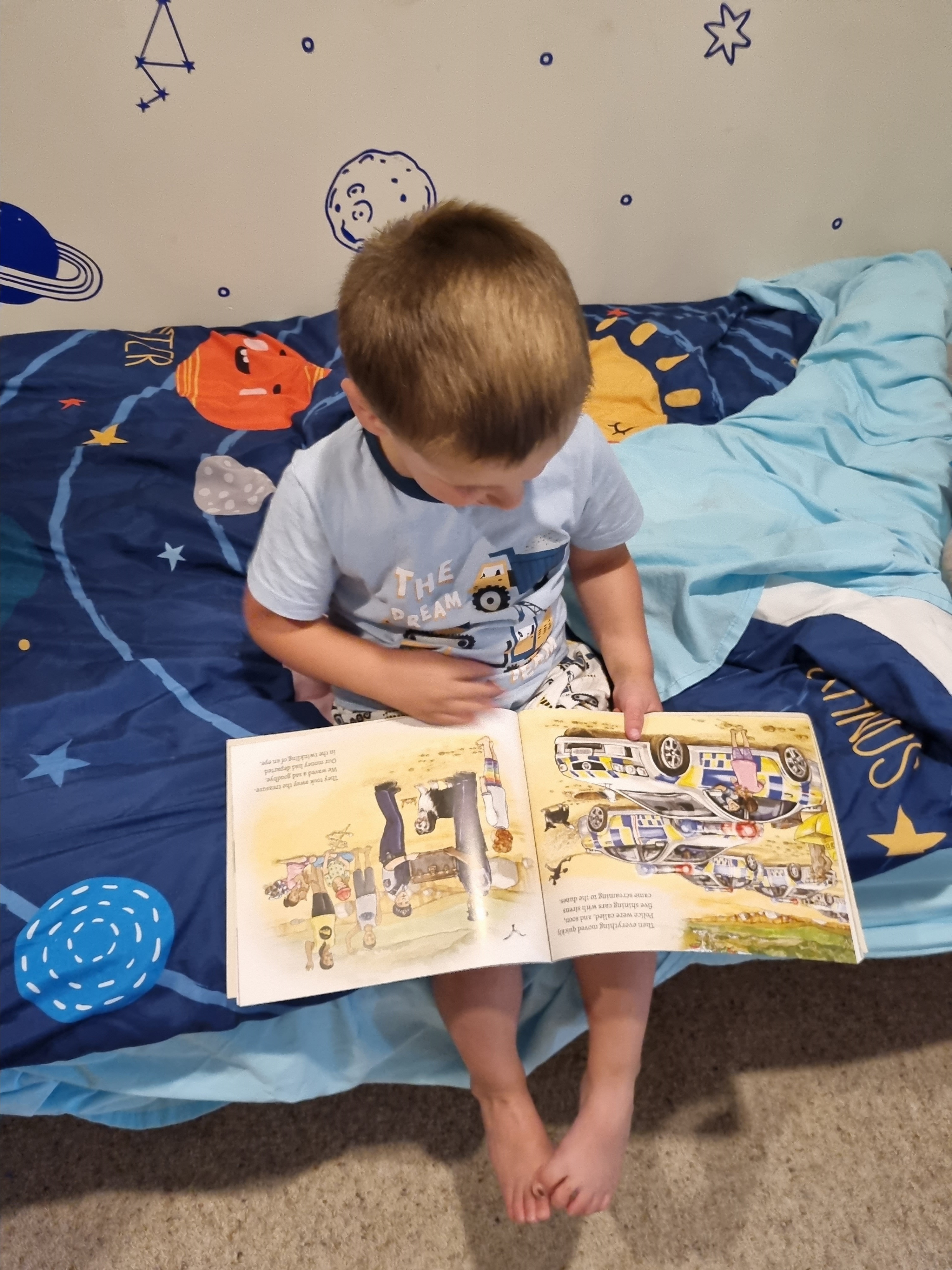 Mr Three was so excited to find that he was to review this book that he grabbed it to "read" before anybody else in the family could look at it. He is familiar with the series and loves the books - the colourful illustrations and the way that the Little Yellow Digger always turns out to be the hero appeal to his sense of fun and adventure. This story, just like all the others, has similar wonderful pictures which are so easy to follow that a pre-schooler can get the gist of the story with few or no words at all! That is so helpful when children are learning to spell out their first written words; knowing the context helps them to work out the meaning. After the initial investigation of "his" new book, Mr Three constantly returned to it on his own to "read" the story to himself.

The police cars were another point of interest for Mr Three. He thought it was sad when they took the money away as he had expected those who found it would be able to keep it, but when he discovered what was really going to happen to the money he cheered up. He was delighted when Charlie and the Little Yellow Digger were later rewarded for their rescue efforts. He would have liked a little more information about the robber and how the treasure ended up there in the first place, but in the absence of more information he just did his own speculation - helped by Miss Five, who has a good imagination.

This Little Yellow Digger story is really two stories within one. The first one is about the rescue of the truck from the sand. There is a lesson here about how dangerous an incoming tide can be; Aotearoa New Zealand is a maritime country with easy access to the coast, even for people who live inland. Swimming and boating are both popular sports, but it is essential to respect the environment and understand the risks that water can pose. The owners of the truck in this story were lucky, and their vehicle was rescued thanks to the Little Yellow Digger, but the ending could have been quite different if they had been trapped inside while the tide was coming in.

The second story is about the treasure box revealed as a result of the Little Yellow Digger's rescue efforts. Charlie the dog helps to uncover the box, and what they find results in a huge police presence. Although finders are not keepers, at least not this time, all ends well for everybody including the real owner of the box contents. Justice is done and everybody is happy with the possible exception of the robber!

This is a truly delightful story which appealed to Miss Five as much as to Mr Three. It has joined the ranks of their favourite books for bedtime, and should prove just as popular in years to come.

The famouse opera singer Violetta von Cacklefur is in Gloomeria to perform at the Royal Mousetropolitan Theater! But the mischievous phantom of the theater has an old grudge against her. It's up to Creepella and Geronimo to track him down in the theater's spooky basement... before the curtains rise and he ruins the show!