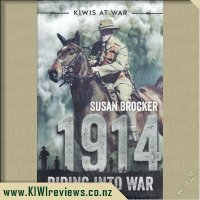 Note to the Author: If you happen to read these reviews, please check the spelling on page 95; "several solders had fallen to their deaths"

I was initially intrigued by this book, because of the topic; ANZAC Mounted Regiments. I wasn't even aware that such a group existed, so I was certainly curious to see how the story went. As you go through the book, you soon realise why you had not heard much about the mounted troops, and why it is still a little recognised subgroup of the ANZACs.

This is targeted at the "young adult" audience, and is structured in such a way to maintain interest. Fast paced, focusing on actions rather than descriptions, the book flows quickly from one event to the next. While I enjoyed the pace, there were many potentially exciting parts that were glossed over very quickly, which disappointed me (I love sea battles). For a book about war, that features death frequently, there were very few in depth descriptions, which gave the story a much more "children's book" feel to it, as opposed to "young adult".

But this author does well to incorporate many different aspects of the war' from training, through marches, base camps, travelling on the seas, trenches, close-quarters combat, infirmaries, and adjusting to varying degrees of loss. the one thing about this book that annoyed me, was how every chapter ended with a preview of what was to come in the upcoming chapter. While it is a useful method in larger books, providing a nice cliffhanger to pause on, this book is not overly long, so the frequency of these "spoilers" quickly became tiresome.

But I certainly enjoyed it, and it was rather educational; teaching me interesting factoids about horse care on extensive boat trips, training regimes, etc. A nice light read.

1914 - Riding into War is the first book in a series of books about the war. Over the next four years, a new book will be released about each of the years after 1914. I think it was powerful that as I was reading the chapter in the book about August 1914, I was able to stop and think about the fact that it was exactly 100 years on from the events being used as the basis to that chapter. The same effect will be felt by readers as they read 1915, 1916, 1917 and 1918 over the upcoming years.

Reading this book gave me some insight into areas of the war that I had never considered. When I think of the wars, I think of the battles, weapons, deaths, effects on the family etc. The first half of this book was dedicated to giving the reader some knowledge of what it was like for the young men and their horses in the lead up to the more commonly referenced part of the war. I had never even thought about the possibility that the boys would have taken their own horses over to battle. I think that the way that the preamble to the war is documented in this book is unique and very much worth reading. Personally, I gained a lot from it.

The book provides a great introduction to what it was like for a soldier serving in the army in World War One. It covers events prior to departure from New Zealand, signing up (including those who were underage) and the harsh reality of war. It covers the differing lifestyles of soldiers and cavalry troops, the care of horses during the transit and in the training grounds in the war zones.

Although this book is about fictional characters, it presents a lot of information about what it was like for the young men who blindly and excitedly signed up to serve, often under age. They were so keen to see the world and serve their country, however, they didn't really understand the full consequences of what they were going to experience. The soldiers just had to look after themselves but the mounted troops had to look after their horses first and then themselves. Some of the animals became sick because they were not properly cared for. It was so sad to read about the reasons for the horses dying.

While reading the book, I felt drawn in, as though the events were really happening to people I knew. It felt like I was there, right beside the boys as they went through the process of signing up, training, travelling on the ships, spending time in Egypt, in the trenches. The latter part of the book was very much about life in the trenches, on the frontline and the resulting injuries and deaths. I found it rather emotional and so real. I think that younger teens would need some prior discussion / knowledge before jumping in and reading the book as I think that some of them might find it a little heavy going. With the right support, it would be a great read for them.

The historical descriptions of landings, battles and lifestyle appear to be factually accurate (based on my previous knowledge anyway). I think that the combination of fictional characters and real historical facts has been well done and written in such a way to make the reader believe that it is all real. It is a realistic, yet toned down version of events suitable for young adults. Great detail has been provided about the experiences that people went through during the war, allowing the reader to imagine what it was really like for the soldiers who were experiencing the events first hand.

There is a detailed glossary at the back of the book. This would be very helpful to a younger reader, who may not have the knowledge of some of the vocabulary used in the book.

This book is designed for young adult readers. I found that as an adult, I thoroughly enjoyed the book. I found it easy to read and became absorbed by it. It has made me want to find out more about the war and has provided me with information about the lead up to the battles that I had no prior knowledge about. I will be hunting out the subsequent books as they become available.

Alice in Wonderland is one of the most wondrous, truly original stories ever written - filled with magical and marvelous happenings. On its 150th anniversary in 2015, Lewis Carroll's tale of a world gone topsy-turvy gets a unique picture-book retelling of the beginning of Alice's journey, with elegantly simplified text that keeps all of the astonishing adventures and wide-eyed amazement of the original.