ProdID: 6179 - Chronicle of the Fallers 1 - The Abyss Beyond Dreams
Written by Peter F. Hamilton 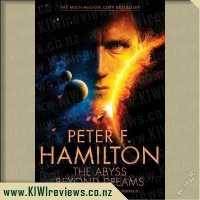 Disclosure StatementFULL DISCLOSURE: A number of units of this product have, at some time, been supplied to KIWIreviews by Macmillan Publishers Ltd or their agents for the purposes of unbiased, independent reviews. No fee was accepted by KIWIreviews or the reviewers themselves - these are genuine, unpaid consumer reviews.
Available:
October 2014

Chronicle of the Fallers 1 - The Abyss Beyond Dreams product reviews

When images of a lost civilization are 'dreamed' by a self-proclaimed prophet of the age, Nigel Sheldon, inventor of wormhole technology and creator of the Commonwealth society, is asked to investigate. Especially as the dreams seem to be coming from the Void - a mysterious area of living space monitored and controlled because of its hugely destructive capabilities. With it being the greatest threat to the known universe, Nigel is committed to finding out what really lies within the Void and if there's any truth to the visions they've received. Does human life really exist inside its boundary?

But when Nigel crash lands inside the Void, on a planet he didn't even know existed, he finds so much more than he expected. Bienvenido: a world populated by the ancestors of survivors from Commonwealth colony ships that disappeared centuries ago. Since then they've been fighting an increasingly desperate battle against the Fallers, a space-born predator artificially evolved to conquer worlds. Their sole purpose is to commit genocide against every species they encounter. With their powerful telepathic lure - that tempts any who stray across their path to a slow and painful death - they are by far the greatest threat to humanity's continued existence on this planet.

But Nigel soon realizes that the Fallers also hold the key to something he'd never hoped to find - the destruction of the Void itself. If only he can survive long enough to work out how to use it...

Set in the now quite expansive 'Commonwealth' universe, this is the third story that focuses on the Void - the enigmatic alternate reality that occupies the center of our galaxy. Guarded by the advanced species known as the Raiel, it has periodic bursts of expansion that threaten to consume our universe from the inside out.

This tale has, at its center, Nigel Sheldon - co-founder of the Commonwealth - who volunteers to be forcibly injected through the barrier and into the void by the Raiel - but to be honest he features in the story far less than you would expect from reading the teaser. When he does show up for more than a brief cameo, it takes a bit to realise that you are reading a very detailed flashback that goes back years. Keeping in mind that time passes differently inside the Void than it does in our universe.

In this tale, you are given a whole new insight into the true nature of the Void, and the origins of Skylords and the city of Makkathran from the first two Void stories. As revelations go, this tale has some doozies scared throughout what is, in its own right, a compelling story with some really interesting twists. It is easy to spot that this series was originally planned as a trilogy, then cut back - the pace of this book is far faster than any of his previous multi-title stories.

Overall, this is another must-have book for any Peter F. Hamilton fan. It brings everything we love about his work - advanced science that doesn't seem entirely unbelievable and impractical even at today's level of technology, rich characters that are easy to emphasize with where necessary and a fully self-consistent world - and draws you in so smoothly you won't realise you've been reading for an hour when all you meant to do was grab a quick five minute read.

This book is designed for the aspiring fiction writer who needs to kick start their imagination. Packed with activities and daily tasks, it offers guidance through the basic stages of writing creatively: Inventing plot and dialogue, crafting characters, dealing with setting, pace and structure, and even overcoming writer's block.

Original, stimulating, and often funny, this is the ideal guide both for the independant writer, and for ... more...