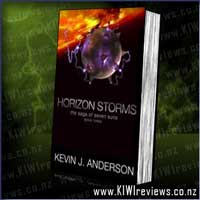 The titanic war between hydrogues -- powerful aliens that live within gas-giant planets -- and faeros, fiery creatures inhabiting suns, continues to sweep across the Spiral Arm, extinguishing suns and destroying planets. It is a time when Chairman Basil Wenceslas of the Terran Hanseatic League and his figurehead King Peter must unify all branches of the human race to stand together against the threat . . . even if they must resort to deception and oppression to do so.

But the freedom-loving Roamer clans and the forest-dwelling people of Theroc, whose "green priests" can communicate across vast distances through a network of sentient worldtrees, will not give up their independence so easily. The iron-fist policies of Chairman Wenceslas force the disparate civilizations to forge alliances of their own, creating turmoil that may break human civilization apart, as surely as the destructive hydrogues will.

Partly as a distraction from their peril, partly as a desperate hope, the Hanseatic League launches an ambitious new colonization program using the new network of alien transportals, instantaneous gateways that take hardy pioneers to settle new worlds once abandoned by the ancient insectlike Klikiss race. But the new territory comes with its own dangers and deeply buried mysteries.

In the ancient Ildiran Empire, Jora'h -- the newly crowned Mage-Imperator -- must face the awful responsibilities and sinister secrets his predecessors have imposed upon him: from the extensive breeding program forced upon a colony of hopeless human captives, to a surprising and uneasy pact with the beetle-like Klikiss robots that could result in the total extinction of the human race. But Jora'h must also survive a threat no other Mage-Imperator has faced in ten thousand years -- open rebellion among the Ildirans, an astonishing civil war and a challenge to his rule that could break apart the entire Empire.

Quite proboably my favourite of the series thus far, this volume really starts to bring things together... we now know the story between the four ancient races, each an elemental in it's nature... the watery Wentals, the earthbound Verdani, the fiery Faeros, and the gas-dwelling Hydrogues... add to this the slowly unravelling mystery of the Klikiss and thier traitorous robot creations, plus the short-lived Humans and Ildirans... it makes for some twisted plotlines, I tell you.

And as if the Hydrogues aren't enough to deal with, the Ildirans have a renegade trying to hijack their telepathic thism network, and the humans are trying to erradicate or absorb the Roamer clans into the Hansa, while the Roamers are just trying to help the Therons rebuild after the devastating attack on the Verdani Worldforest. Talk about throwing salt into open wounds! However, as we see near the end of the book, the Verdani have a few tricks up their leaves.

Overall, an excellent continuation of the saga and I look forward to finding out what book 4 has to offer... then roll on book 6 later this year!