« Navigation: Kupe & Cook. An Ocean in a Mind and a Mind on an Ocean review

Korora and the Sushi Shop review 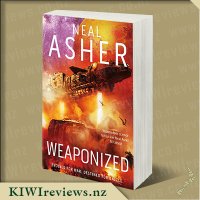 Disclosure StatementFULL DISCLOSURE: A number of units of this product have, at some time, been supplied to KIWIreviews by Macmillan Publishers Ltd or their agents for the purposes of unbiased, independent reviews. No fee was accepted by KIWIreviews or the reviewers themselves - these are genuine, unpaid consumer reviews.
Available:
May 2022

A bright new future for humanity - or a dark and inescapable past. With the advent of new AI technology, Polity citizens now possess incredible lifespans. Yet they struggle to find meaning in their longevity, seeking danger and novelty in their increasingly mundane lives.

On a mission to find a brighter future for humanity, ex-soldier Ursula fosters a colony on the hostile planet Threpsis. Here, survival isn't a given, and colonists thrive without their AI guidance. But when deadly alien raptors appear, Ursula and her companions find themselves forced to adapt in unprecedented ways.

And they will be pushed to the very brink of what it means to be human. As a desperate battle rages across the planet, Ursula must dig deep into her past if she is to save humanity's future.

SHINE: Make Them Wonder What You've Got
Rating: 8.5

Based on the reviews I have written on Neal's works in the past, it won't come as a surprise to find that I very much enjoyed this Polity tale. Placed as a prequel to pretty much every Polity story he has written, this is set on a world at the far reaches of the Polity space, a world that at first glance appears to be barren except for a few lower lifeforms. That illusion is very rapidly dispelled after the first few encounters with the alien residents of the planet. Called "cacoraptors" by the colonists, these alien creatures seem to be evolving in intellect and viciousness at a pace that no normal life could manage.

Ursula leads the expedition, a Polity human stripped of most of her elective enhancements to experience 'life' in its rawest form. Without AI of any kind and devoid of advanced offensive and defensive technology, the colony suffers horrendous losses while they scramble to adapt and develop suitable defences. Guided by a rather odd individual, the bioscientist Oren, the colonists accept nanotechnological upgrades in the form of bracelets that guide their adaptation and a suite of new, internal upgrades.

However, it soon becomes apparent to Ursula that not all is as it would first appear when it comes to the upgrades and Oren's goals. From the start of Chapter 1, it is made clear that the battle between the colonists and the native life is not as 2-sided as it should be - it starts as a clear-cut case of 'us vs them', but time... and Oren's schemes... start to blur those lines. Then, when the new species on the block - the utterly xenophobic, war-obsessed, crablike Prador - make an appearance seeking resources to repair their damaged ship, the battle lines between Ursula's colonists and the native life blur beyond distinction.

Add to this volatile mix the discovery of ancient Jain ruins that somehow got overlooked by the initial probes that scouted out the planet, and suddenly everything that preceded this confrontation falls into place and it becomes clear that the colony was never going to be left to fend for itself, free from the influence, and interference, of the AI's that run the Polity. Freedom in the Age of AI rule is a tenuous concept at best, often a self-delusion, and sometimes an outright lie.

Once more Neal brings the reader into his most popular and prolific universe, then drags them down into the trenches of a war like no other. Because this tale exposes the reality of the Jain at the very start of the story timeline, long-time fans of his work may struggle to place the revelations about the Jain into context when many of his earlier stories, set well after this point in the story timeline, either didn't acknowledge or feigned ignorance of, the Jain. It's something many authors who build worlds struggle with.

How does one add such significant plot elements into the start of the overall story arc without ret-con'ing to the point of obfuscation? Nonetheless, Neal weaves a fascinating tale of one of humanity's possible futures that remains entirely self-consistent and doesn't have any real points of contradiction. It's easy enough to explain the "later" lack of information on the proposition that the AI ruling class simply didn't see fit to inform the biological protagonists in that story of the facts. Neal explicitly alludes to such in many places through his stories, so it is a simple enough thing to overlook and move forwards. After all, do our politicians not do the same to us today?

Overall, this is a great story that stands alone fairly well. Even if this was indeed the first Polity story you read, you will pick up the 'state of the nation' easily and quickly, and enjoy the roiling, ongoing battle to survive against insane odds. The ending is shocking in its absoluteness, and it leaves the reader to decide "Did she die, out there on that lost and lonely world, or did she in some meaningful way survive? And if so, could she still be considered "human" in an age where only those who live on the fringes would be recognisable as human by today's standards. Another excellent addition to the Polity universe, and while not the best "first book" to read in the series, it sets the scene for the adventures that lie downtime.

Nicky has a secret. Now you see her: now you don't.

She has the ability to disappear and reappear in another place - her gift controlled through the powers of thought alone.

Someone else has discovered Nicky's extra-sensory talent: a group called the Project. Anonymous, benign in manner, yet also sinister in its secrecy, the ... more...