Home > Categories > Books > Historical > Navigation: Kupe & Cook. An Ocean in a Mind and a Mind on an Ocean review

« No Home for a Weta review 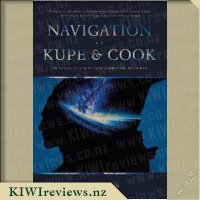 Disclosure StatementFULL DISCLOSURE: A number of units of this product have, at some time, been supplied to KIWIreviews by Mary Egan Publishing or their agents for the purposes of unbiased, independent reviews. No fee was accepted by KIWIreviews or the reviewers themselves - these are genuine, unpaid consumer reviews.

Navigation: Kupe & Cook. An Ocean in a Mind and a Mind on an Ocean product reviews

In Navigation: Kupe & Cook, Kingsley Smith traces the beginnings of travel by boat as man migrated out of Africa and arrived in Sahul (Australia and New Guinea) 50,000 years ago.

Smith discusses the role of navigation in Literary societies, up to the voyages of Captain James Cook, and in Orality societies, especially those in Polynesia up to the time when Kupe made his voyage to Aotearoa.

Skills acquired while navigating along major rivers aided the development of oceanic voyaging. Navigation demands communication and memory. Writing allowed the production of the earliest books and maps, materials and instruments in Literary societies. The instruments used by Cook, particularly the accurate chronometer, enabled precise latitude and longitude navigation.

In the absence of a written language, the Orality societies developed intricate methods to reinforce memory. Two different Pacific navigation systems are highlighted, one of which, the Vaeakau-Taumoko, is the oldest in this part of the world. The other is the Tahitian system which uniquely allows latitude and longitude navigation by referencing the Rua and Ana stars and the Pou pillar of navigation.

The book includes extensive references at the end of each section and a useful selection of photographs, maps, and diagrams to complement the text.

It is rare to find a book which is painstakingly researched and deserving of a place on an academic's shelf but at the same time has appeal for ordinary readers who may not have the specific background or breadth of general knowledge which is reflected in this account. I am not a scientist, a mathematician, a cartographer, or a historian. Yet I found myself immersed in the various arguments presented; I was able to follow the logic of the narrative, and was unwilling to put the book down because it had drawn me in so completely. This is the hallmark of the true educator: the ability to share ideas and to draw fresh conclusions that are accessible to all readers.

Having grown up in what Kingsley Smith calls a "Literary society", I have always relied heavily on written words and diagrams to acquire new knowledge. I write down things that I want to remember or explore later, using a pen or a keyboard. I sketch maps and outlines and, rough though they may be, I can derive meaning from them. If I am travelling to a new area, I will consult a map (whether physical or online). These are all ingrained habits which are second nature.

So what if I had no means of writing, no books available, no internet, not even a pamphlet to advise me how to make something work? Would I still be able to function? This was the argument that made this book so compelling. Using the traditional methods available within their own societies, Cook and Kupe voyaged across the same vast ocean and back again. Cook used maps, books, diagrams, etc. And Kupe? He used the knowledge of his ancestors which, in the absence of the written word, was memorised and passed on through the generations. This store of knowledge was based on observation of the surrounding world: the stars, the ocean currents, the winds, the migratory patterns of sea creatures and birds. Which was the more effective? Impossible to tell because they both worked.

But this is not just a narrative about two accomplished navigators using two very different methods. Smith traces the history of their predecessors, outlining the way that people first began to explore rivers and seacoasts, and ultimately the ocean itself. These explorations were triggered by many events - changing coastlines, climate change resulting in some food sources becoming scarce, the need to find space for expanding populations, and the opportunity to trade for exotic (and therefore desirable) merchandise. Instead of starting his narrative in 1100 AD or so, which some traditions indicate was the time that Kupe might have been exploring, Smith argues that mankind was on the move thousands of years earlier than that date. Kupe, and later Cook, were the product of many centuries of exploration and learning by their respective ancestors.

One of the aspects of this book that makes it easy to follow is the way all the chapters are divided into smaller segments, each with a dedicated subtitle. Another useful attribute is the provision of a large number of coloured maps, tables, diagrams, and photographs. Although some of them are very small and quite difficult to read, the resolution is such that I was able to photograph them and then enlarge the result. Modern cellphones are the perfect tool for that. However, it was also clear to me that the book is by its nature an information source founded in Literary society methods! One could say the same about the cellphone used to enlarge sections of some of the maps.

Smith explores in detail the way that those in Orality societies were able to memorise and apply significant amounts of knowledge. He suggests that learning was often through association with various events and objects as well as through repetition. As Literary societies have gradually infiltrated those that were formerly Orality based, so modern data storage systems have superseded the old ways.

This is a book that will be read and re-read not only by me but also by members of my immediate family. It is attractively presented, with a durable hard cover binding and glossy, high quality pages which will withstand years of handling. With its illustration of the intersection of the mind and the ocean, the cover design reflects the duality of the navigation systems of Kupe and Cook.