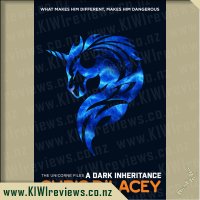 Michael Malone's life has not been the same since his father disappeared three years ago. Determined to find him, Michael gets unwittingly drawn into supernatural organisation UNICORNE, who claim to have vital information for his quest. But they want something in return. Something that is hidden in Michael's very bones . . .

This was an intriguing novel, that followed an even more intriguing focal point. I won't completely ruin the surprise, but it follows the concept of being able to alter reality due to the multiverse theory. The fact that the book uses multiverse theory is amazing in itself.

I would rate this book in the light-medium range, regarding ease of reading. It took maybe 4 hours to read from cover to cover, and the language was easy to understand. The imagery was often very simple, but it allowed you to properly create your own world around the characters (who were much better described). I rather enjoyed the characters that were used, with many broken families intertwining and hidden connections in this small town slowly revealing itself. I found the minor school love interest to be rather comedic and something that I could readily empathise with.

I enjoyed seeing how all of the random unrelated bits of knowledge gained slowly joined together to form the 'truth' of the story, but even I was surprised at the culprit, and the final accusation (no spoilers!) This book allowed me to come to my own conclusions early on, and still managed to misdirect and make me curious as to the plotlines left incomplete.

I loved the contrast between in-home squabbles, fantasy, and secret organisations, and Chantelle's reimaginings were imaginative. This novel started rather slow, but by the end it was racing along, and I found myself anxious, wondering how it would end with so few pages remaining. It became quite the novel that could almost give you a brainfart as you try to ascertain what is real and what isn't. A great read.

Score: 8.1
Product reviews for listing 3167: One Dog and his Boy
Written by Eva Ibbotson

Hal's parents are rich. His huge house has sweeping silk curtains, expensive carpets and not a speck of dirt anywhere.

But on Hal's birthday, a miracle happens. And when he sees Fleck at the Easy Pet Agency, he knows he's found his perfect dog.

Whatever his parents say, he will never give Fleck up. If dog and ... more...