Skandar and the Unicorn Thief review 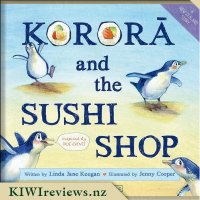 Disclosure StatementFULL DISCLOSURE: A number of units of this product have, at some time, been supplied to KIWIreviews by Scholastic (NZ) or their agents for the purposes of unbiased, independent reviews. No fee was accepted by KIWIreviews or the reviewers themselves - these are genuine, unpaid consumer reviews.
Available:
July 2022

What better place for a penguin to waddle across the road than to a local sushi shop, lured by the smell of delicious seafood?

In July 2019, a little blue penguin (korora) was removed twice - the second time with a friend - from beneath a sushi store near the main railway station in Wellington, and returned to a nesting box on the waterfront. Their adventure provided the inspiration for Linda Jane Keegan's humorous story.

Children will enjoy reading about the daring korora and the efforts of the local police and DOC to escort them to somewhere more appropriate for penguins. Beautifully illustrated by Jenny Cooper, this book includes fascinating facts about blue penguins or korora (also known as fairy penguins in Australia). 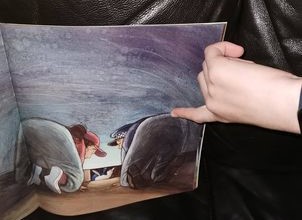 This is one of those unique stories that appeals to children of different ages. Miss 10 is an enthusiastic conservationist and loves books that are based on fact - she was sold on this one as soon as she spotted the speech balloon assuring the reader that the story was "Inspired by TRUE EVENTS". She was soon curled up with the book, and we did not hear another word from her until she had read through to the end. Much to her delight, we were expecting visitors so she would get to share the story with the six-year-old twins.

I watched her reading to them, one twin on each side, and the toddler at her feet. He was content to sit there even though he could not really follow the story, but she showed him the pictures before turning each page and he was able to recognise the birds. The twins, however, loved the way that the sushi shop was the nest of choice for the little penguins. They like sushi too so approved of the choice! At their age, they were easily able to follow the story although Miss Ten had to explain a couple of the bigger words like "crustaceous delights" and "deflated". When she got to the last page, where the author explains some of the interesting facts about penguins, she did not read it to the little ones; instead, she summarised the information in words they could understand.

Watching the pleasure the children got from this story was pure magic. It was a learning experience for all of them; Miss Ten had to rephrase some of the text so the twins could understand it all, while they in turn had lots of questions and kept interrupting with their own feedback. Mr Two, the toddler, joined in at his level, but we all laughed when Miss Ten asked which was his favourite picture and he declared that it was the policeman's bottom! This is the image where Wini and Constable Zhu are crouching over to look into the penguin in her makeshift burrow.

As an adult, I was interested in the fact sheet at the end of the book. It is useful for children to increase their knowledge of native species and their habits, but I regularly find that I learn something new as well. The rhyming pattern makes the main text most accessible for children; the smaller font and more complex sentence structures in the "Penguin Particulars" make it clear that this page is for older readers. Miss Ten is going to keep the book on her shelf and has promised to read it again when the twins and their little brother next come to visit - a treat to look forward to!

Two seemingly unrelated stories. One in words, and the other in pictures, come together. The illustrated story begins in 1766 with Billy Marvel, the lone survivor of a shipwreck and charts the adventures of his family of actors over five generations.