Disclosure StatementFULL DISCLOSURE: A number of units of this product have, at some time, been supplied to KIWIreviews by Scholastic (NZ) or their agents for the purposes of unbiased, independent reviews. No fee was accepted by KIWIreviews or the reviewers themselves - these are genuine, unpaid consumer reviews.
Available:
March 2022
Samples for Review:

"New Zealand is a land of birds,
from North to Stewart Island.
They are found in all the forests tall,
in parks and swamps and dry land."

This beautifully crafted book features many kinds of birds, from the mighty albatross to the shy kakapo and kiwi to the much-loved tui, all of which make their homes in diverse habitats. Less celebrated birds such as the mallard, pied stilt, and shag are also included. 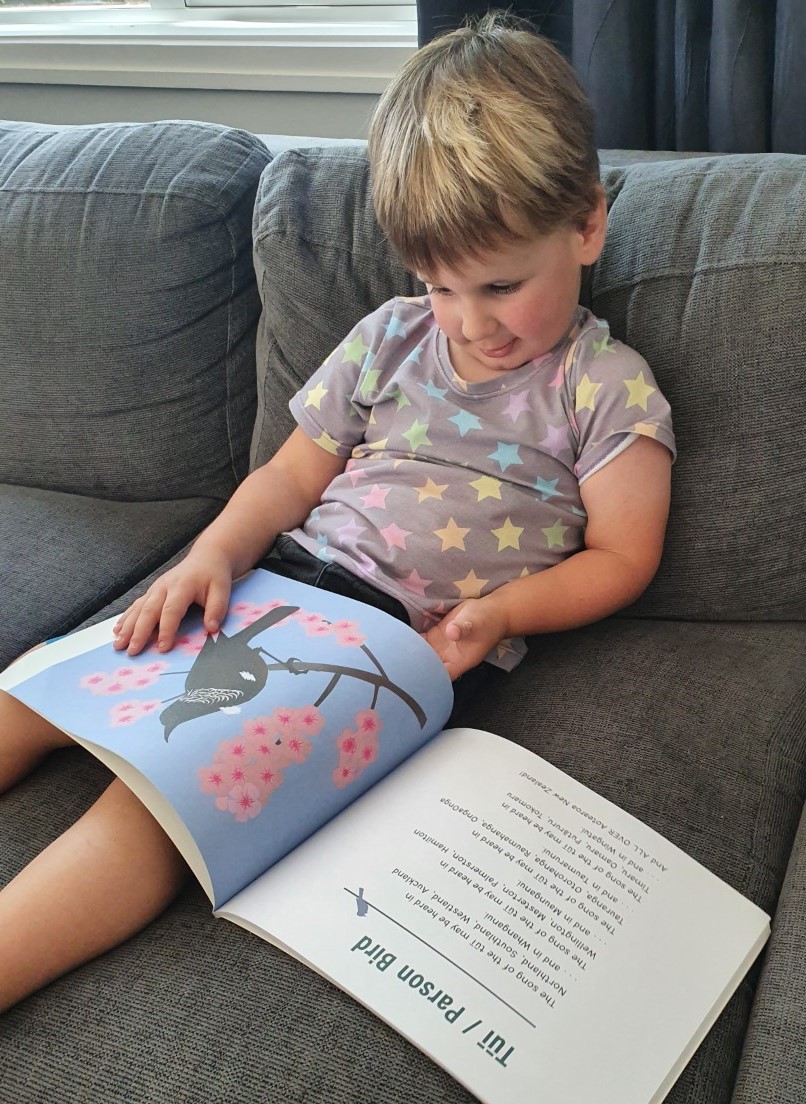 This is not a conventional storybook; it is a reference book for youngsters about the birds of our country. As such, it is a fun way to discover more about the different species to be found here - some common, others rare and confined to a few select areas. Each bird is described accurately but simply in language that is easy for very young children to understand. Both English and Maori names are given as the title for each "poem", and the graphics are realistic enough to make identification a straightforward task.

A book set out like this was a new experience for Mr Three and Miss Four, but once they had got the hang of it, they found it fun to flip through the pages and find their favourites. Each time the book was brought out they selected a new bird and enjoyed listening to the rhyming description while they examined the corresponding picture. They began by choosing the birds they already knew about - starting with the pukeko (which they had never before heard referred to as a swamp hen) and kiwi - but then they branched out into the more unusual birds. This process was an education for their parents too as they discovered unfamiliar birds like the bittern.

Miss Four loved the illustrations. She said the birds were beautiful, and nominated the full-page picture of the tui as her absolute favourite. Mr Three remembered the family's recent trip to the museum and was excited to see the moa depicted in the book as he had seen a moa skeleton in the foyer. This prompted discussion about conservation and which of our birds are extinct or endangered - interesting topics for youngsters as they tend to be passionate about these issues and want to learn more.

The value of a book like this goes way beyond its appeal for young children. I shared it with two teenagers when I first got it, and they were just as enthusiastic about the information it contained and the quality of the artwork. As the older commented (from the ripe old age of 17), you are never too old to learn something! I then took the book to Mr Three and Miss Four for their input, and I am sure their parents got as much out of it as they did. My one reservation would be that it was a paperback edition and might not last as well as a hardback. I would also like to see a little more information about the birds at the end of the book, given its appeal for an older audience as well as for youngsters.

During World War Two, several thousand New Zealanders served in the Merchant Navy. Many braved the deadly German U-Boats during the Battle of the Atlantic and sailed in perilous convoys to Artic Russia and Malta.

Others manned transport and hospital ships for the Allied landings in North Africa, italy and France, or ferried troops and supplies across the vast Pacific and indian Oceans.