The Cat and the King review 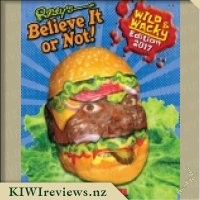 Ripley's Believe It or Not - Wild & Wacky Edition 2017 product reviews

The latest edition of Ripley's Believe It or Not! is packed with wild and wacky facts you really won't believe-until you see the amazing pictures!

I have always been a fan of the Ripley's Believe It Or Not book fan, I love to read little bits of trivia and random facts to inform my family of and they're always perfect bite sized bits of information. The kids were immediately drawn in by the painted man on the front cover and the gingerbread dragon on the back cover. As always, the first couple of pages lets you know what your topics will be and a brief history of Mr Ripley. At the end of each chapter there was a mini quiz but my kids didn't want to pick the options given, so we found them to be a bit of a flop.

There were a few things that I didn't care about, but there's always something that you won't like, but there were plenty of things that the kids and I did like and found both interesting a cool. My youngest loves anything Frozen, so those bits were a huge hit. My middle child loved the tattooed women from Myanmar and my eldest wants the Star Wars and Dalek rooms (of course he does...). There's plenty in here for everyone, both small tidbits of info and some slightly bigger bit, which includes mini interviews, which I thought were a great addition.

I've always enjoyed these books and this one doesn't dissapoint. "Ooh, wow, a book about hamburgers!" exclaimed Mr Six as he saw me coming in with this book. "I love cooking!" It took me a little while to regain my composure as I explained that it was a graphic of someone's face, decorated with face paint to resemble a food item. Well, that was it - I had wondered if Mr Six might be too young to appreciate the zany articles and pictures in the book, and whether I would be better to share it with an older child. No such need; not only was Mr Six hooked straight away, but Miss Four raced over to join him and they ended up reading the book together (with occasional help from me as I wanted to read it too).

When Mr Six' mother was growing up she had seen the Ripley's series on TV and was familiar with the idea of sharing and sensationalising the unusual. For her children, however, this was something quite new. Neither of them had ever heard of Ripley's Believe It Or Not, but suffice to say they certainly have now. The book itself is professionally produced with a hard cover and high resolution glossy illustrations, but there is plenty of explanation provided as well so the pictures are supported. Sometimes this is needed as you cannot quite believe what you are seeing.

The highlight for both the children was the elephant taking a selfie. Little kids are used to the animals in their story books exhibiting human characteristics, so they love it when life imitates art and animals really do things that humans can. We kept going back to this page so they could admire it again, and this sparked a lengthy discussion on animal intelligence. Other favourites were the paw-stars (kittens playing baseball), the toddler hugging a pet reindeer, and the giant web with the bird the spider had caught. They were relieved to find that the bird was rescued before it could be preserved for spider food!

Apart from the animal pictures, they also singled out the face painting that had attracted Mr Six' attention initially, and the Bajau stilt houses where villagers live their entire lives at sea. I can see this book becoming the kids' equivalent of a "coffee-table book" as it is not a volume you read by starting at Page 1 and progressing through the pages; it is the sort of collection that you open at random and immediately find something of interest. I can see it amusing the children (and their parents, and any visitors whether young or old) for some time to come.

He's always been a happy little utensil. But lately, he feels like life as a spoon just isn't cutting it.

He thinks Fork, Knife and Chopsticks all have it so much better than he does. But do they? And what do they think about Spoon?

A book for all ages, Spoon serves as a gentle reminder to celebrate what makes us each special.