« All Fall Down review 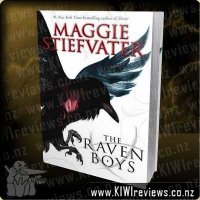 Disclosure StatementFULL DISCLOSURE: A number of units of this product have, at some time, been supplied to KIWIreviews by Scholastic (NZ) or their agents for the purposes of unbiased, independent reviews. No fee was accepted by KIWIreviews or the reviewers themselves - these are genuine, unpaid consumer reviews.
Available:
October 2012

"There are only two reasons a non-seer would see a spirit on St. Mark's Eve," Neeve said. "Either you're his true love . . . or you killed him."

It is freezing in the churchyard, even before the dead arrive. Every year, Blue Sargent stands next to her clairvoyant mother as the soon-to-be dead walk past. Blue herself never sees them - not until this year, when a boy emerges from the dark and speaks directly to her.

His name is Gansey, and Blue soon discovers that he is a rich student at Aglionby, the local private school. Blue has a policy of staying away from Aglionby boys. Known as Raven Boys, they can only mean trouble. But Blue is drawn to Gansey, in a way she can't entirely explain. He has it all - family money, good looks, devoted friends - but he's looking for much more than that. He is on a quest that has encompassed three other Raven Boys:
Adam, the scholarship student who resents all the privilege around him; Ronan, the fierce soul who ranges from anger to despair; and Noah, the taciturn watcher of the four, who notices many things but says very little.

For as long as she can remember, Blue has been warned that she will cause her true love to die. She never thought this would be a problem. But now, as her life becomes caught up in the strange and sinister world of the Raven Boys, she's not so sure any more.

The story had me hooked from the beginning, I didn't want to put it down and was very interested in finding out what happened and how. The characters were well written and some parts of the book were rather obvious at what was about to happen but lucky they were few, some of the story still caught me by surprise.

I enjoyed reading about Blue who has always been told that her kiss will kill her true love so she has avoided kissing anyone but how will she know who her true love is? It was interesting to see her reactions and interactions with the raven boys. It is good to see how the boys all have different views and opinions and how they all relate to each other but still manage to be friends.

The plot had the usual "bad guys" and that was easy to see from the start. Really looking forward to reading the second book and hoping to find and read any future books in this series as this book had it all.

I was unsure what to make of this book when I first picked it up, but it very quickly had me hooked, so much so I think we ended up with late dinners a few nights until I finished it!

The general concept of the book/series reminds me of the Rising Dark sequence but in a much more modern setting. What appears to be three groups of completely unrelated people come together in an interesting way as the search for leylines becomes serious and dangerous. The characters are very believable and we're given a very good introduction to them in this book.

Overall I feel that this is a very well written book, just enough has been tied up that you don't feel completely lost, yet at the same time you are left wanting for the next book to see what happens. I would suggest that most people give this a go, a good book to read to get you out of your normal comfort zone if that's what you're after.

On the Eve of St. Mark's Day, April 24th, Blue joins her mother's half-sister in the churchyard as the spirits of those fated to die within the next year walk past. This is tradition, something she has done every year with her mother, only this St. Mark's Eve, something is different. When Blue suddenly realises she can see one of the spirits, an elegant Raven Boy from Aglionby Academy, there are only two possible explanations, neither of them particularly satisfying. Either Blue is this Raven Boy's true love... or Blue is somehow responsible for his death.

What appears at first to be a significantly romantic promise of a plot quickly changes into something more complex, more adventurous, and generally better than what I had expected. The core of this book is a mystery. Gansey, one of the four Raven Boys key to this story, has his heart set on uncovering the resting place of Owen Glendower, for the first to do so is granted a favour. His research and travels have formed his unconventional personality, his easy smile and his longing for something that may not even exist. Along for the ride are hot-tempered Ronan Lynch, wealth-resenting Adam Parrish and quiet and mostly absent Noah.

The friendship between these boys is one of the best things in this book, for each Raven Boy is very well written, and not just another two dimensional character. For a group of boys so different and so complex, Maggie Stiefvater managed to make them all strangely compatible. There is no rush to set everything in motion. Stiefvater's writing is as eloquent as ever, almost lyrical at times, and it shines through in her well-developed characters.

There is much uncertainty surrounding elements of the plot, but not in a way which frustrates and leaves disappointment. I am very interested to read the 2nd in the series, and of course the 3rd, as I cannot wait to see where everything heads towards and how the story will conclude.

A YA coming-of-age road trip novel about obsession, self-discovery, female power, and the people we meet along the way - by Costa Award shortlisted author Kit de Waal. The perfect read for anyone who's ever wondered where they came from and where they might be going next. De Waal responds to classic Moby Dick by tearing the power away from obsessive Captain Ahab and giving it to a teenage girl.