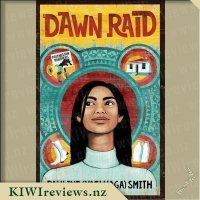 Through her spirited and heartfelt diary entries, we join Sofia as she navigates life in 1970s New Zealand. She is a typical 13-year-old girl: her main worries are how to get some groovy go-go boots, and how not to die of embarrassment giving a speech at school!

But when her older brother starts talking about protest and overstayers, and how Pacific Islanders are being bullied by the police, a shadow is cast over her sunny teenage days. We experience the terror of being dawn-raided, and gain an insight into the courageous and tireless work of the Polynesian Panthers as they encourage immigrant families across New Zealand to stand up for their rights.

This is certainly a book that can be read more than once; I have to admit to reading it a second time myself in case I had missed anything. I enjoyed the style of the narrative which captured nicely the turns of phrase that would be used by a young teenager of the 1970s - even if there were one or two expressions I did not recognise! Reading it was almost like eavesdropping while one young person told another her story; the conversational tone and occasional confidences gave the reader an intimate glimpse into Sofia's aspirations and her own view of society at the time.

The story is written on two levels. The first, which will draw in young readers since they can relate to her, deals with the daily life of a typical teenager who is into music, fashion (especially go-go boots), friends, school, family, and part-time work. Not so different from teenagers today! There are the perennial problems such as friendship issues. not being able to save towards a goal, being bullied, and having to step outside her comfort zone for the class speeches and then facing the even greater challenge of the competitions.

The second level is that of racism, an issue which is still a problem today although some things at least have changed for the better. The role of the media in reporting a one-sided view of events is shown to be responsible for stirring up racist attitudes among Pakeha; the government of the day is depicted as being manipulative in encouraging the media in this "fake news"! New Zealand is certainly not presented in a good light.

Through Sofia's commentary, the effects of the anti-Pasifika propaganda are highlighted. The Savea family are representative of many others in the same position; their whole lives are affected, not only through the official actions, but also through the daily racism encountered at school or work as ordinary people are encouraged to believe that all Pasifika are overstayers and undesirables.

I like the way the author has woven the two levels into one cohesive story. The reader gets the deeper message, but it is presented in a way that makes it readily accessible to readers as young as nine or ten; the style is flowing and easy to follow. For the older reader who wants to know more, there is a short bibliography and sources list included. There are also some archival photographs which help to contextualise the era. After my second reading, I felt that I had not only learned something new, but had also enjoyed the experience immensely.

Camille wants to find the perfect boy, with an athlete's body and a poet's brain. But when she's mocked at a college party, she knows there isn't a boy alive who'll ever measure up. Enter Zoe, her brilliant but strange best friend, who takes biology homework to a whole new level. ... more...