« Game of Thrones: Season One review 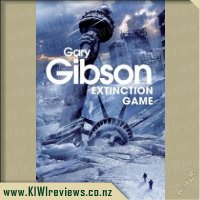 Disclosure StatementFULL DISCLOSURE: A number of units of this product have, at some time, been supplied to KIWIreviews by Macmillan Publishers Ltd or their agents for the purposes of unbiased, independent reviews. No fee was accepted by KIWIreviews or the reviewers themselves - these are genuine, unpaid consumer reviews.
Available:
May 2015

Instead, The Authority rescue from a desolate Earth where he was the last man alive, and take him to a parallel reality. He's then trained for the toughest conditions imaginable and placed with a crack team of specialists on an isolated island. Every one of them is a survivor, as each withstood the violent ending of their own alternate Earth. And their new specialism? To retrieve weapons and data in missions to other apocalyptic versions of our world.

But what is The Authority, this shadowy organization that rescued Beche and his fellow survivors? How does it access timelines to find other Earths? And why does it need these instruments of death? As Jerry struggles to obey his new masters, he begins to distrust his new companions. A strange bunch, their motivations are less than clear, and accidents start plaguing their missions. Jerry suspects the Authority is feeding them lies, and team members are spying on him. As a dangerous situation spirals into catastrophe, is there anybody he can trust? When your life is based on lies, how do you hunt down the truth?

In most "apocalypse' movies, you get a devastating, life-extinguishing event occurring. However, in this tale, you are treated to a smorgasbord of 'end of life on earth' scenarios, a generous dash of conspiracy, a liberal helping of confused love, and a double-shot of horror... That's how I saw this book. The premise is pretty simple, a fairly well-explored trope in the genre - hopping between parallel versions of our world, each a little different to those on either 'side'. Move further away from your home worldline and things start to get really strange. In your home line, John Key is Prime Minister of NZ, but in another he's a male escort, or a criminal. The protagonist in this story is a sorry chap indeed, quite possibly the last human alive on his world. Rescued, in a manner of speaking, he is introduced to a new world and a team of dimension jumpers whose missions seem more than a little strange to him.

As the plot unfolds, we get insight into each of the characters, how they tick and what sort of hell they were rescued from. This gives us the opportunity to empathise with them, understand their motives, and maybe even understand the motives behind their actions. While some characters are enigmatic or immediately dislikeable - and that is their purpose - others are easy to bond with and immediately capture you with their back-stories. What frustrated me the most though was that the most fascinating character of them all hardly makes much of a showing, and when he does pop to the fore and performs an amazing feat he vanishes immediately afterwards never to be heard from again. With no 'cliffhanger' implying a sequel, it's a real shame.

Overall, I did like this book, but not as much as I was hoping to. It would have been a great start to a trilogy, but ended way too smoothly for there to be any hint of such a thing. However, that being said, I could easily see this as the script for a TV series pilot, and a part of me really, really hopes someone with enough clout in the industry sees it too. While I suspect it would come across as a hybrid of "Sliders", "Stargate" and "The Day After Tomorrow", they would really have to screw it up to make it less than watchable, and if they put some real effort (and budget) into it, it could easily reach incredible. We shall have to see...

George loves to help out at hidden Wormestall Farm, even though it's full of extinctly scary creatures, like the dodo in the dog bed and the dinosaurs in the duck pond. When Mortifer the giant basilisk goes missing, it's up to George to find him before wicked taxidermist Diamond Pye can add to her stuffed animal collection...