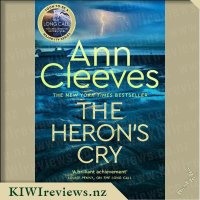 Disclosure StatementFULL DISCLOSURE: A number of units of this product have, at some time, been supplied to KIWIreviews by Macmillan Publishers Ltd or their agents for the purposes of unbiased, independent reviews. No fee was accepted by KIWIreviews or the reviewers themselves - these are genuine, unpaid consumer reviews.
Available:
September 2021

North Devon is enjoying a rare hot summer with tourists flocking to its coastline. Detective Matthew Venn is called out to a rural crime scene at the home of a group of artists. What he finds is an elaborately staged murder - Dr Nigel Yeo has been fatally stabbed. His daughter Eve is a glassblower, and the murder weapon is a shard of one of her broken glasses.

Dr Yeo seems an unlikely murder victim. He is a good man, a public servant, beloved by his daughter. Then another body is found - killed in a similar way, Matthew finds himself treading carefully through the lies that fester at the heart of his community and a case that is dangerously close to home.

This is Book 2 in the Two Rivers series.

I like a good whodunnit, especially when I cannot predict the ending! Sometimes you get a book that advertises itself as a thriller, a yarn that will keep you perched on the edge of your seat right to the end, but to my way of thinking that is not a whodunnit - it is an everyoneknowswhodunnit. I was delighted to find that this book DID keep me guessing, right till the last couple of chapters - and the guilty party was not who I had thought it might be. This was one occasion when I am very pleased to be proved wrong; the whole point of reading books of this genre is to be challenged.

I am familiar with Ann Cleeves' work, but this is the first book I have read in the Two Rivers series. She writes fluently and I find I can relax to the point where I spend longer reading than I had initially planned - her main characters are well fleshed out and easy to relate to. It is reassuring to see that she normalises a Down Syndrome character by including her in an active role; there is no mention of disability or any other handicap that might draw undue attention to her. The main character, Detective Matthew Venn, is married to another man. Again, this is a detail rather than an issue; it arises as a complication in the subplot when his disapproving mother visits him at home, but has no implications for his work relations within the police force.

The Devon setting is presented - with some artistic licence - as a rural, quite self-contained society. It is easy to think of England as being overcrowded and urban-based, but Cleeves delves into the sparsely populated and less developed parts of the country. This means that the landscape itself becomes a key player in the plot. Birds (the herons of the title; the dawn chorus) set the scene and time of day. The sea is close by, featuring in descriptions of sunsets over the water and the sound of waves. Sheep graze in the nearby fields and dogs can be heard in the distance. Often these natural phenomena are used to introduce a new action or a decision by one of the characters.

Although there is a large cast of lesser characters, it is easy to keep track of them because they are all so different. My personal favourite is Jonathan, Matthew's husband; he offers a wonderful contrast to Matthew's straitlaced, rather proper manner. Jonathan is relaxed, empathetic, charms everyone (even his scary mother-in-law), values his life as an artist, and gives the impression that he is a thoroughly nice person. He also has a sense of humour and the ability to make people in crisis trust him. I thought there was a strong and plausible dynamic between the two men, and their relationship added a fascinating dimension to the story.

The only drawback for me was the book's ending. As I mentioned, it was a solid finish to a highly readable book and one I felt more than vindicated my attention. However, I found the last couple of chapters too drawn out; I thought the narrative could have been wound up more succinctly. This is a detail, and many will not agree with me, but I felt it detracted from my enjoyment. Once I had found out "whodunnit", I was ready to move on to Book 3 in the series!

A nightmare with no end...?

In AD 2600 the human race is finally beginning to realize its full potential. Hundreds of colonized planets scattered across the galaxy host a multitude of prosperous and wildly diverse cultures.