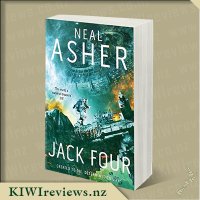 Disclosure StatementFULL DISCLOSURE: A number of units of this product have, at some time, been supplied to KIWIreviews by Macmillan Publishers Ltd or their agents for the purposes of unbiased, independent reviews. No fee was accepted by KIWIreviews or the reviewers themselves - these are genuine, unpaid consumer reviews.
Available:
via online store and selected book retailers

Created to die - determined to live... Jack Four - one of twenty human clones - has been created to be sold. His purchasers are the alien Prador and they only want him for their experimentation program. But there is something different about Jack.

The Prador's king has been mutated by the Spatterjay virus into a monstrous creature, along with his children. They were infected by the virus during the last humans-Prador war, now lapsed into an uneasy truce. But the Prador are always looking for new weapons - and their experimentation program might give them the edge they seek.

Suzeal trades human slaves out of the Stratogaster Space Station. She thinks the rewards are worth the risks, but all that is about to change. The Station was once a zoo, containing monsters from across known space. All the monsters now dwell on the planet below, but they aren't as contained as they seem... and a vengeful clone may be the worst danger of all.

This high-octane adventure is set in the same world as Neal Asher's acclaimed Polity universe.

I can not express, without going all gushy-fanboi, how much I love Neal Asher's works. Very few authors have managed to capture my attention the way he has and, unsurprisingly, those that have are pretty big names in the literary world. Neal's 'Polity Universe' is enriched with every tale, and while I love the 'bigger' stories that require a trilogy to tell properly, these 1-off titles are an invaluable part of filling in all the gaps that surround the 'big players' in his world.

The synopsis above does a pretty good job of giving the reader the rough outline of the story, but of course it's only the barest outline of a wonderfully intense and immersive tale. Jack Four is no John Doe, and his journey from cloned blank to hero of the story is as wild and varied as it is enthralling. How he reacts to the dawning realisation of his true nature and how he came to be where, and what, he is now is as captivating as it is detailled. Neal has the wonderful ability to write as though it is all real and he's watching it on some godlike screen, rather than inventing it. While that is the goal of any and all authors, Neal does it in a way only a few other have managed, IMHO.

While this is clearly a 1-shot story, by half way through the book I found myself unexpectedly feeling really saddened by that fact - I was so invested in the story of Jack's plight and his adventures on the road of self-realisation, that I really, really wanted this to be the first of many. And who knows, maybe we'll see Jack pop up again somewhere down the track. One can only hope.

Overall, while it feels a bit cliche to say, this is yet another fine addition to a universe I have fallen for in a big way, and wish dearly I could live in. My only slight niggle is that I really have no idea where in the greater timeline fo Neal's stories this fits... I know Neal occasionally posts a timeline on his Twitter account, but he's so prolific with his tales that it needs constant updating. Something he is often far too busy writing more amazing tales to get around to. But you know what... that's a small price to pay to get spirited away into a future I can only hope becomes a reality somewhere downstream.

It is the 23rd century. Interstellar travel is possible, but colossally expensive, so humankind's efforts are focused on the only nearby Earth-like world. Isis is rich with plant and animal life. but every molecule of it is spectacularly toxic to humans. The whole planet is a permanent Hot Zone.

Zoe Fisher was born to explore Isis. Literally. She has been cloned and genetically engineered to face its terrors. But there are secrets implanted within her that not even she suspects - and the planet itself contains revelations that will change our understanding of life in the universe.