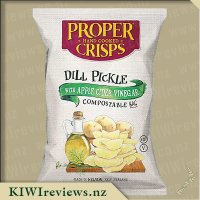 Disclosure StatementFULL DISCLOSURE: A number of units of this product have, at some time, been supplied to KIWIreviews by Proper Crisps or their agents for the purposes of unbiased, independent reviews. No fee was accepted by KIWIreviews or the reviewers themselves - these are genuine, unpaid consumer reviews.
Available:
via online store and in supermarkets

This is going to be dill-icious! Enjoy the zingy tang of Apple Cider Vinegar with a subtle hint of pickling herbs and Dill. Sure to get your tastebuds dancing.

Made using 100% New Zealand grown potatoes, High Oleic Sunflower Oil and a sprinkle of Marlborough Sea Salt. Hand-cooked in small batches by our 'Proper Chefs' who make sure only the best, most golden crisps end up in each bag! You can really taste the difference.

Once the last morsel has been devoured, simply pop the packet in your garden compost and it will naturally decompose - how eco is that!

I like pickles, not to the extent of grabbing one out of the jar and eating it straight, but I will happily eat them in a sandwich, wrap or, as my family often does, on a home made pizza. When I saw dill pickle as a chip flavour, along with apple cider vinegar, I wasn't too sure about how I would enjoy it. Knowing the two flavours, I knew they would go well together, but given that I'm not a big apple cider vinegar fan and only like pickles when they're with something else, I was doubtful but figured I may as well give it a try, after all, I can't stand kumera but enjoyed the last kumera chips I had.

Opening these up, the smell hit me instantly and I was looking forward to giving it a try. My friend was over for the day, so I took advantage of having another viewpoint or two (as her kids were with her) to add to this review. I can honestly say that I immediately disliked the flavour of the chips, I made myself have more than just a couple but found that I disliked it as intensely as the first chip. My two older kids didn't like it, my youngest spat theirs out, then changed their mind and said they liked it but not enough for us to need to buy another bag. However, my friend and her eldest loved the chips enough to finish the packet for me and are planning on buying some themselves.

This meets the usual high standards of Proper Crisps but is not a flavour my kids and I will be buying.

It's interesting to feel a home compostable bag. As in, an actually compostable bag that you can add to your compost heap at home, unlike all of those plant-based or biodegradable bags that still take decades or centuries to break down, and even then only under certain conditions. For that alone, Proper Crisps will always receive kudos as a responsible company for caring about all aspects of its business; not just the crisps, but the packaging as well.

I'll be honest and let you all know that I'm not a huge fan of pickles, nor apple cider vinegar. This doesn't seem like something I would enjoy, and if I hadn't tried a couple as a free sample at the Auckland Food Show, I probably wouldn't have wanted to properly try these out. My level of dislike towards pickles and apple cider vinegar is quite strong. I've tried apple cider vinegar drinks and it is so overpowering that I can't really enjoy the flavour at all. As a result, I've never scored them well in reviews. I even pull the pickles out of my Cheeseburgers and Big Macs at McDonald's, because those teeny tiny slices so heavily affect the flavour of the whole item. Considering all of that, combining these two into a single chip flavour seems dangerous, and well, let's be honest, it seems stupid that I even bother trying them.

BUT I hold Proper Crisps in high regard due to the consistent quality of their chips, and the minimal number of ingredients that their products generally have, so here I am giving them the benefit of the doubt. As a side note, it's actually interesting to see that this product seems to have more than the usual ingredients of potatoes, oil, and salt, in fact, even with citric acid and sugar added to the recipe, the herb seasoning still has as nearly many ingredients as the rest of the ingredients combined. 2.8g of sugar (per100g of crisps) isn't a huge amount, but it's still interesting to see how the brand is slowly changing over time and their need to create new novelty flavours and products is inevitably pushing them slowly further from that minimalist healthy core.

Back to the product in hand. As soon as you open the bag, "Pow!" that aroma of vinegar whacks you in the face. I got that usual look of disappointment when I look into the pack and see that it is only a half-filled. I know that space for air is left to protect the crisps during transportation etc, but I always feel like the pack could be filled more, as Proper Crisps are stronger than the average chip and don't need such protections in place (it could even be a selling point for a future variety. Then again, these chips are actually thinner. I need to keep in mind that the kumara chips that I was introduced to Proper Crisps through are significantly hardier than potatoes crisps, but they do this Dill Pickle variety does still feel less structurally sound.

Realistically, this variety of crisps is actually a simple twist on the traditional salt and vinegar. Despite the personally offputting name, there is very little that is out-of-the-ordinary here. The crisps are indeed a little thinner, partially due to the air bubbles that emerged in the cooking process making these similar to the texture and thickness of Copper Kettle crisps. The flavour feels substantially less artificial. It isn't just salt and vinegar "flavouring" added to it, it feels like these potatoes have been soaked in cider vinegar to absorb that flavour naturally. creating a crisp that has natural variability in its flavour, sometimes stronger, sometimes subtler. The dill pickle flavour is very subtle though, hitting you in the first bite but quickly fading away leaving the aftertaste that, understandably, is briny and sweeter.

Would I buy these though. Unfortunately, my dislike of pickles means that while I could eat them. It certainly won't be anywhere near the top of my list of crisps to buy. It would only really get picked if somebody else wanted a salt and vinegar flavour and I wanted to give them a bit of a healthier option. So, for entertaining, this would be a goer, but personally, it still gets the expected result of "I'd rather not". 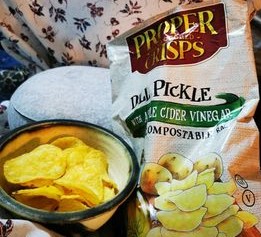 We both love Proper crisps so it was great when we were given a pack to review just before we were to leave on a road trip. On our last couple of trips, we set out with a pack of Proper crisps each time (different flavours), so it was important to keep the tradition up. Our bottomless Mr 13 called just as we were packing the car, so we opened the pack and tipped some out into a bowl so he could taste them as well. He gave them the thumbs up, and said we could leave the rest of the packet if we liked, but we declined the offer. We wanted to try them too!

Most conventional salt 'n' vinegar crisps are just that. Lots of salt, lots of vinegar, and not much potato. In fact, I don't normally buy them as the flavours are far too strong. This product is different. For a start, Proper crisps are reasonably thick so you know you are eating potatoes and not some amorphous product that may or may not be a vegetable. Second, the dill pickle flavour is milder than most so it does not catch in your throat and make you cough.

As the passenger, I was given the task of passing a crisp regularly to the driver - and of course each time I did this I had one myself as well. We ate them just as they were, but saved a few for the evening so we could see how they would go with a dip. I had a pottle of salmon dip in the chilly bin just waiting to be sampled, so when we finally arrived at our destination, we got it out along with the remaining crisps. I enjoyed them this way too; in fact, I think I preferred them with the added flavour. However, they were still pretty good on their own.

I love the packaging. It is colourful, informative, and funny all at the same time. The team member who made this particular batch is identified on the back of the pack just above the "best before" date. Our pack was made by Chantalle! The bag itself is compostable, which in itself is a strong selling point, and the contents are vegan and gluten free. These qualities ensure that customers for whom these are important will seek them out on purpose.

I would like to try them crumbled on top of macaroni cheese in place of parmesan and breadcrumbs. The flavour would be amazing, and crispness would be guaranteed. I will first have to purchase another packet, however, as our review pack is now completely empty.