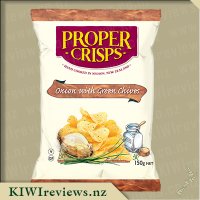 We're proud of what we do. Our crisps are made in the traditional way using only natural ingredients and we want to keep it that way. So we thought why not make a classic Onion flavour using only simple, real ingredients?

When it comes to snack foods, chips are my favourite, if there is a bag of chips opened around me I can't help but eat them, even if I'm trying to be healthy and avoid such treats. I have tried several of the popcorn and chip varieties from Proper Crisps now and have enjoyed each and every one of them, and if I must be honest I will say that they are one of my favourite chip brands now and one which it is totally worth paying that little bit extra for.

When I saw that there were bags of the newest Proper Crisps up for review I was very excited to try them out especially after seeing that they were Onion with Green Chives flavor. Sour Cream and Chives is a favourite combination of mine and so I was hoping that these would be similar in taste. Like all other crisps in the Proper range these were light and crunchy with a texture very similar to that of a Kettle chip, and most importantly most of the chips were in large sized pieces, rather than pieces which resembled crumbs, something I often find to be the case with other chip brands. The packaging is quite plain, however, I do like it, it is the perfect look for the brand as in my opinion it shows that these chips are quite natural and only made with the best ingredients, all which are reflected in the picture on the front of the bag.

The rugby was on and my partner was after some chips to eat so I pulled out the bag of the Onion with Green Chives crisps, We smelt the bag first and found it had a very mild smell of onion to the chips, after eating about half of the packet of chips we agreed that the taste was also quite mild, we could taste the onion however some chips certainly had a lot more flavour than others, we also noted that on some chips you could see the flavor and the green chives and that these generally had more taste to them. We both said that these chips are nice on their own I personally loved them, however, an onion based dip would have made them a notch better still, unfortunately, we didn't have any dip on hand and there was no way there were going to be any chips left at the end of the game!

If you are a fan of beautifully cooked, light and crispy chips with a mild taste then you should give them a go, I know I will be buying these again along with the rest of the Proper range when they hit supermarket shelves, I look forward to seeing the next flavor in your already awesome range.

My kids love chips, comply love them and could easily go through a bag in one sitting if I let them, so it was no surprise that they all reached for this when it came out of the review box. These chips have that gorgeous crunch that we expect from Proper Crisps and they don't all look the same which makes them feel like an authentic, handmade product and it seems like there would be better all round as they're not sticking with a 'perfect' potato with which to make these crisps. Opening it up, we all gave the packet a sniff and all agreed that there wasn't any discernible smell to them.

A friend of ours was around when these were opened up, so we offered some to him which he curiously accepted. He found the subtle taste to them to be rather nice, enjoyed the texture and loved how crisp they were, quickly checking what brand it was so he can keep an eye out next times he does his shopping. My mum also agreed that she enjoyed the subtle flavour and found them to be morish. My ten year old thought it was absolutely delicious and would finish off a bag on his own, my nine year loved the crisps as well but didn't enjoy the final pieces at the bottom which had ended up with a stronger flavour, while my seven year old has asked me to buy it again.

I, personally, prefer sour cream and chives, there's something about the edge of this flavour that doesn't quite sit right with me, but my kids loved it so I'll buy it for them.

I do love Proper Crisps. Good size crisps, and good strength to them too, they are a quality product. This new variety is a trip down memory lane for me. Opening the bag, there is a faint familiar scent, and a tingling of the senses. Biting into the first chip, there is an instant burst of flavour that reminds me of the kick to the taste buds you'd get when you ate Munchos Spicy Tomato flavour. As soon as that flavour hits though, it dissipates and you are left with a lingering aftertaste. That lingering aftertaste is somewhat similar to the Bluebird Original Cut Sour Cream and Chives.

It calls into question what about these chips makes them onion flavoured? Is that first bite zinger a hit of sweetness like that of a red onion? Whatever that flavour is, it isn't distinguishable enough to be able to tell what it is. You can just tell that there is a flavour there.

It is interesting to have two such distinctive flavours in the one chip though, and it works really well having a burst of intense flavour that gets replaced by a longer lasting flavour sensation. Combine that with the superior form of the Proper Crisp crisp and you have a winner in my books. An ideal frontrunner when you are putting together the kiwi onion dip for a party, rather than just picking a random assortment or crisps. They could certainly tweak the formula slightly to give it more of whatever ingredient gives it that initial burst. That is the bit that really sells the chip for me. If I want sour cream and chives, I'd just buy the Bluebird ones.

They have their points of difference. They just need to increase the gap further to make sure they stand out.

One of the classic Kiwi flavours when it comes to crisps is Sour Cream and Onion - it's our favourite dip, and chips of the same flavour complement it well. When I had a chance to try these new Green Onion and Chive flavour chips, I was curious how close to that classic benchmark they would come.

The first bite showed me these should be a winner! Even though they didn't have that smooth, creamy cheese flavour, they definitely had that tangy zing that makes the crisps such a hit. With BBQ season on the way it's worth thinking about grabbing a few bags of these to share, because they will start conversations. They have enough familiarity to please, but enough difference to get people talking about them.

I wanted to give the "Portions" a full 10/10 but I couldn't, simply because I wanted more in the bag! They are so more'ish that I found myself grasping at air well before I was ready to give up on them. For me, this is a great sign, since I don't normally finish a bag of chips in a single sitting. I had the bag on my desk next to me while I was playing around in Photoshop and snacking as I worked. My usual go-to flavour for this is salt & vinegar but I find that after a few handfuls I have to stop because the vinegar makes my mouth uncomfortable. No such issues with this flavour at all!

As they aren't in stores yet, I'm going to have to wait to try them with dips, but I think they will go really well with that classic Kiwi dip, as well as a nice creamy blend of hummus, tahini and grated parmesan, or a smooth beetroot dip maybe. Either way, this is a flavour I am certain will become a new classic in no time! Roll on retail release!

I fell in love with the salt and vinegar chips these guys make because it doesnt leave my mouth feeling all acidic and painful the way regular s&v chips do, so when I was offered a chance to try a flavour so new it didn't even have its own bag yet, I was keen.

Opening the bag didn't hit me with any big flavours or smells so I was wary. The first few chips I ate were very mild flavoured so it was suggested that I roll the top of the bag closed then turn it upside down and give it a good but gentle shake to make sure the flavour was evenly spread. That worked because the next crisp was so much more flavourful. The flavour that came through was something closer to sour cream and onion. I could taste onion and chives but there was something else there that brought to mind that sour cream flavour you get in the mass market chips. No complaints from me though coz thats another flavour I really enjoy.

Assuming these will hit supermarket shelves with a price tag the same as the rest of the proper range they will be on the high end of what I would pay for crisps but I have to be honest and say that if they are the same prices as the rest, I will probably grab a bag of salt and vinegar over these. Nothing wrong with them but the flavour isn't unique enough for me to give up my preferred flavour snack chips of choice. I think the recipe may need a bit more work to refine the flavour to either admit to or remove the hints of sour cream. Apart from that though this is yet another great product from a company with a great attitude and reputation. Not every new flavour is going to be a market-killing hit so its no big deal this isnt one to rave about, but if you like that taste then you are wiser to choose a bag of these over a cheaper but less worthwhile mass-produced brand.