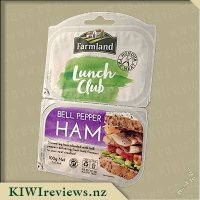 Disclosure StatementFULL DISCLOSURE: A number of units of this product have, at some time, been supplied to KIWIreviews by Farmland Foods or their agents for the purposes of unbiased, independent reviews. No fee was accepted by KIWIreviews or the reviewers themselves - these are genuine, unpaid consumer reviews.
Available:
at select supermarkets 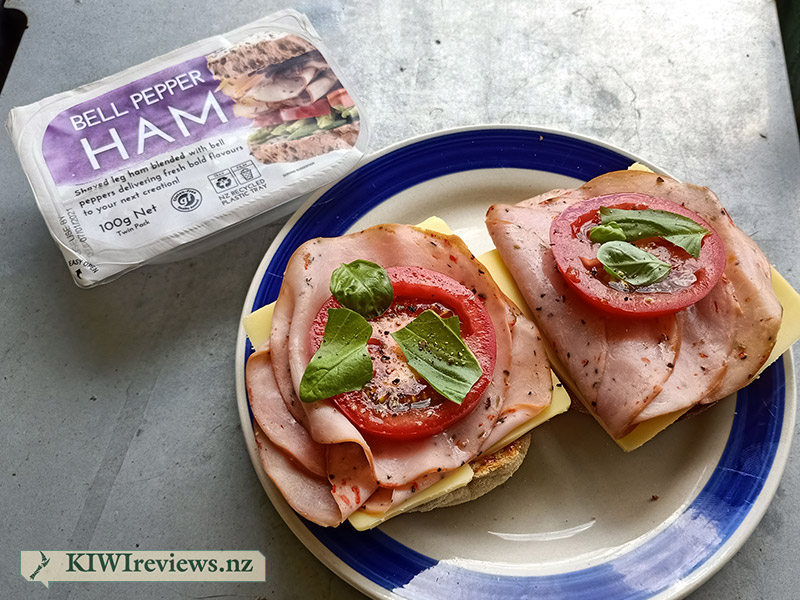 I do like me some thinly sliced ham when it comes to snack foods. It's a versatile and easy to work with ingredient in so many tasty treat options. Sandwiches, muffins, crumpets, crackers... it's a simple way to top almost anything. To have bell pepper - aka capsicum - pre-included was a masterstroke by the team at Farmland Foods. I certainly appreciated it, because I always find the capsicum falls off as I eat, otherwise.

For this review, I halved and toasted a "muffin split" and topped it with a thin layer of tangy tomato relish, some Colby cheese, the ham, sliced tomato and garnished it with fresh basil and cracked pepper. SO YUMMY!

The pack contained about 8 slices of the most tender, flavoursome ham, and had little chunks of capsicum quite evenly mixed throughout. I was actually quite impressed by how even the distribution was - every bite had about the same amount so it was a really nice, even flavour enhancement... unlike some other sorta-similar products I have tried where the added extras were unevenly mixed through so you never got the same flavour profile between bites. This was pure bliss by comparison.

With multiple varieties available, this was the first one I tried, because it had the shortest time left before it hit "Best By"... but if it is any indication of the quality of the range, I know I'm going to enjoy them too.

Overall, this is a great option to consider when you see them in the supermarket chillers. Buy plenty - they won't last long after you bite into the first piece. It's so good, you could easily just eat it on its own. Perfect for the snack platters at the next BBQ or social gathering, and the uses are limited only by your imagination. Try doing a mix'n'match platter with cheeses, crackers and some relishes or chutneys. You'll be the talk of the party!

Now let's be clear; I hate capsicums. And capsicums are bell peppers. Thai chicken pies from BP? Hate them because all I can taste is the capsicum. Subway catering? There had better not be any capsicum or the whole tray is tainted. I love chillis. I love the heat that chillis provide and the depth of flavour that it provides to meals made with it. Capsicums don't really do that though. They are so strong in flavour that they overwhelm any other flavour in the dish, and they don't even have the integrity to bring any heat or spice with them. Worst vegetable ever. But enough rambling on about the bell pepper as a whole, because that is not what this is. This is deli ham that unfortunately happens to have some bell peppers involved.

But we'll get to the flavour later. Let's start with the packaging. For the uninitiated, the Farmland packaging is composed of two hard plastic trays sealed shut with a thin plastic film. Easy to open packs with beautiful pictures of the meat being used in meals, alongside a very informative little piece that explains what part of the packaging is recyclable and what part is not. Look if you can't change your packaging it's great to see some effort put into getting the consumer to actually recycle as much as possible. The packs themselves unopened can actually last for several months, which gives the product a great shelf-life, though once opened you have a matter of days to consume it. But theoretically, you could eat the two pouches two months apart. Snazzy!

Anyway, The Bell Pepper variety of ham is somewhat similar to the Cracked Pepper variety, where the pepper is made into very small pieces and spread evenly throughout the meat. This is in small enough pieces that it doesn't actually override the flavour of the ham, and for once, I can actually tell that there is a tiny bit of heat to it. This isn't a heat that will blast your socks off (and nobody would expect it to), but there is a warmth to it, and a slight pepper flavour that serves to complement the ham flavour rather than overpower it. I was pleasantly surprised at this, and the pack ended up being the first out of the four varieties I tried (Bell Pepper, Cracked Pepper, Maple, and Champagne) it was the first pack to finish. I would love a bit more of a kick, but for it to be the first capsicum-product that I can stomach, it deserves kudos for that. 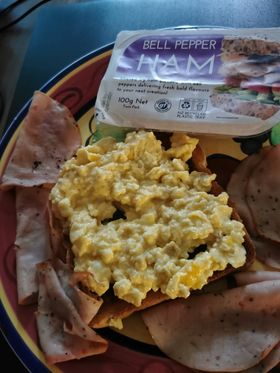 We liked the subtle pepper flavour of this ham - gentle and only slightly spicy so that it would appeal to children, but with that sophisticated hint of chilli right at the mildest end of the spectrum to attract older people as well. Both of us like capsicum and use it frequently in salads and stir fries, so the idea of this ham appealed even before we had tasted it.

After trying the usual slice of meat on its own to check on the basic flavour, we decided to serve some with scrambled eggs in place of bacon. There were some fresh farm eggs in the cupboard which we had been looking forward to enjoying, so we spread out the contents of one of the two ham packs on a large plate and piled the scrambled eggs into the middle. Although we did not cook the ham as such, we had warmed it slightly to bring out the flavour. A hearty breakfast indeed!

We used the second pack to make sandwiches for the children's school lunches, reserving two slices to wrap round asparagus for our own lunch. The children had already commented on how pretty the ham looked with the red and black pieces of pepper dotted throughout. No doubt they would be lifting the top slice of bread off their sandwiches to show their friends! Meanwhile, we found that the combination of ham with asparagus was delicious with a slice of buttered ciabatta and a couple of pickled olives.

I think anyone purchasing the product expecting a strongly spiced meat would be disappointed. Bell pepper is the mildest of all the peppers as it contains no capsaicin. In effect, it is a different type of vegetable, often called a sweet pepper. However, it is full of flavour, and it is this effect that the meat offers. As a student, I frequently ate whole raw bell peppers with meat sandwiches (made of cold roast beef or sliced ham) because that was a quick and easy meal which was nutritious and very tasty. Eating this product made me think of those days because the flavour combination was quite similar.

I am looking forward to buying another packet and trying it on a potato pan pizza with tomatoes, olives, feta, and garlic. This is another easy-cook meal from my student days which I still occasionally prepare today with regular ham. I think the bell pepper variety would be even better because it would add that extra dimension of Mediterranean flavours. Best of all, this is another dish that can be served to children without fear that they will turn up their noses at it.

This is the Original Tandoori Marinade. Mel's Tandoori marinade is also delicious on tiger prawns or marinate a whole fish! Easily done on the barbecue or in the home oven.

Great as a finger food for parties with drinks.

Use the leftover Tandoori chicken in wraps or on pizza. You can also use with vegetables!

This marinade is 100% VEGETARIAN!