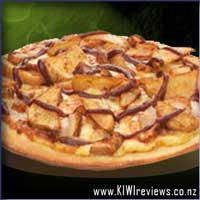 Disclosure StatementFULL DISCLOSURE: A number of units of this product have, at some time, been supplied to KIWIreviews by Domino's Pizza or their agents for the purposes of unbiased, independent reviews. No fee was accepted by KIWIreviews or the reviewers themselves - these are genuine, unpaid consumer reviews.
Available:
for a limited time

I didn't quite know what I was thinking when I ordered this. Most likely I was having a few beers and needed something to soak up that excess alcohol. Well this was certainly a good choice for that. This pizza is the definition of 'carbohydrates'. with potato wedges on top of a pizza, it is a very heavy meal.

Immediately it is obvious that this much be eaten immediately. Wedges do go think and stodgy once they cool, and no amount of reheating will fix that, so I was in a fight against the clock. The chicken cheese and garlic went together well, but the BBQ sauce added little to that. Bite number two, and I bit through a wedge. It was quite dry, and I was disappointed, but then I realised, I'd just missed the swirl of BBQ sauce. I took a third bite, and caught all the ingredients together...and it worked.

It was a pleasant flavour, the BBQ sauce counteracting the wedges, and the chicken and onion crunching together well. I enjoyed it immensely, but I realised that that slice had filled me quite well. A good thing I had friends to share it with, because I certainly couldn't finish the whole pizza myself.

Okay so some things just should not go together!! and this is one of those times. Whoever thought up this pizza topping combo needs to be fired! Take Away Friday where friends get together and scoff a different take away food each week and this week it was Dominoes Pizza so we each chose a different pizza and this choice wasn't made by me....but since I hadn't heard of this pizza and I do like wedges I thought hey it's gotta be good.

How wrong could I be...the wedges were huge they were thick wedges and if not cooked for long enough can be floury and uncooked almost and this is what has happened to this pizza, and it wasn't just a one off because I did try it again a few months later at a staff meeting where this pizza was ordered...and again it was the same.

I can't believe also that this pizza costs more, it has a surcharge! So an over priced pizza that doesn't even taste nice....and I can't believe that people like this pizza but each to their own I guess. Not my choice..and I definitely wouldn't pay to eat this pizza, the wedges aren't nice, they aren't cooked, wedges need to be crunchy and the definitely aren't on top of this pizza...it's wrong, just plain wrong.

Perfect, combine my favourite foods - chicken and wedges, plus bbq sauce. Can't decide if you should get wedges as well? Get them to put them on your pizza!
Very tasty meal, it might be an idea if they chop the wedges up because if you thought hot cheese on your lip was bad, a large wedge gets you just as good.

I'm not really the best person to ask when it comes to BBQ sauces, most of the range of fast foods that have it tend to make me ill. This pizza is thankfully not in that range, which bodes well for future purchase. The combination of the seasoned chicken and wedges was unusual and certainly had me scratching my head a little.

My first bite was a mouthful of molten cheese and hot potatoe. After getting past that, I noticed that the topping flavours mixed well and made for a tasty treat. Potatoe wedges, while they are a novel addition to a pizza topping, have the unfortunate quality that when the pizza cools they take on a floury quality. The Edge crust that this was served on made the pizza more enjoyable, as you don't have to worry about the crust cooling and going all chewy. Great for those with dentures.

Another pizza I would happily get again.

Well, a new pizza... with wedges on top too! How could I possibly resist... Though I admit I am not a great fan of any BBQ sauces (the taste reminds me of burnt beer -shudder- ) I will grudgingly conceed that Domino's BBQ sauce is by far the most palatable of them.

So saying, I DO appreciate a good chicken pizza... and I also enjoy wedges smothered in cheese... so this was already looking to be quite a potential winner for me... all it needed would be some bits of ham and bacon, and it would be a slab of Nachos! (hmmm, now there's an idea... nacho pizza... -drool- )

So, anyways, having ordered this on The Edge crust there was plenty of munch and less to crunch, in terms of leftover crust. This turned out to be an excellent combination that rapidly had me staring at the remaining slices, wanting to keep cramming them into my maw, but knowing that one more slice would have me feeling like Mr Creosote. (OK, Sorry, that's an insider joke for my fellow Pythonites.)

Overall, this WAS a winner in my book. Not quite as tasty as the Steak & Chips pizza but still an excellent addition to the menu, even if it is just a short-term member of the Domino's snarfums family.

Denny's opened its doors in New Zealand in 1988 in Manukau City. Today there are currently 7 stores in New Zealand situated in Highland Park, Manukau City, Wairau Park, Auckland City and New Lynn in Auckland; Christchurch and Porirua, all owned by Rappongi Excursions Ltd. The Company plans to open more restaurants one at a time throughout New Zealand.