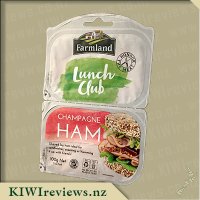 Champagne Ham:
Shaved leg ham ideal for sandwiches, snacking or hamming it up with friends! 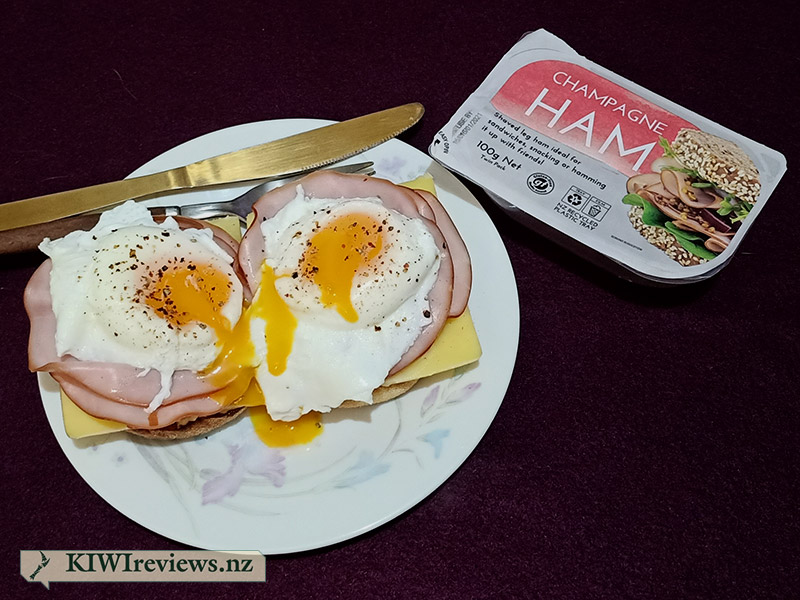 OK, yeah, I need to say more than that, in all fairness. I used to buy shaved Champagne Ham from the supermarket and it was tasty enough, but honestly it was nothing special so I stopped buying it after a while. When I was offered the chance to sample and review this range, I thought it would be interesting to see how it compared, and I was very pleasantly surprised by how much flavour this version had. I also loved the way it was packed in two individually-sealed portions of 6-8 slices each - enough for a sandwich or snack without having any leftovers.

Since I bought some muffin splits recently, I thought I would try an old favourite recipe of mine that I call "Poor Man's Benny" - a toned-down easy version of Eggs Benedict. Toasted muffin split, garlic aioli, Colby cheese and the Farmlands Champagne Ham, topped with a couple of lightly poached eggs. Season with fresh-ground black pepper and sea salt... perfect. This was a wonderful, easy breakfast that was both satisfying and quick to make.

Overall, this is a great idea, well-planned and executed. The price is a little steep, if you compare it to the bulk-processed version at your supermarket deli, but the flavour and ease of use more than compensate for that to me. I used to spend at least the same amount of money on ham, which would then sit in the fridge and after 3-4 days whatever was still there had started to spoil, so this is the top option if you want to reduce wastage to nil. I will definitely be buying this again! 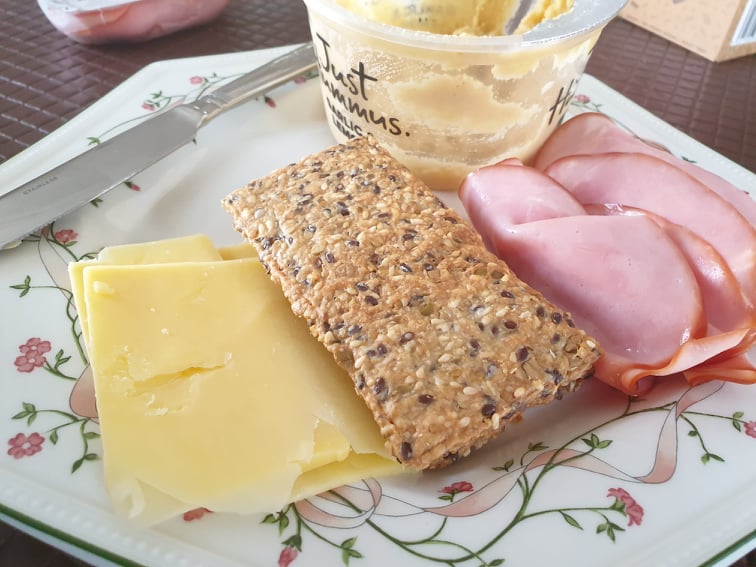 If you didn't know, Champagne Ham is simply ham that has had the bone removed to make it easier to slice. It's usually why it comes in netting to hold it in shape before being sliced up. So that means there is nothing particularly outstanding about this product. There isn't anything that would propel this into the leagues of "unique" products. It's simply shaved ham (in fact, if you read the nutritional information at the bottom of the pack it's labelled as shaved ham, not champagne ham). Deli meat is boneless anyway, so I guess Champagne is simply a way to make it sound fancier when it doesn't have any of the additives that the rest of the product range has (no bell pepper, cracked pepper, or maple glaze).

And "shaved" is actually the perfect descriptor for it, as the meat is cut incredibly thin. Now don't worry about losing out on meat, because the whole range is sold by weight, not the number of slices, so while the slices are thinner than your Cracked and Bell Pepper varieties, there are many more (nearly double) slices to go around. With regards to getting more meat for your buck, it's important to note that these deli meats are comprised of 80% pork. Considering I've reviewed some meats that had 40% pork, this is a higher quality of meat.

This higher percentage of meat means the product contains less ice (er...water) and as such doesn't lose as much volume when it is cooked, neither does it get as wet and slimy as other deli meats do. In a year where hygiene has been of the utmost importance, a slice of non-slimy meat is a must, as is packaged deli meat that requires no human contact, which is another thing that Farmland checks off the list. The product comes split in two, so you can keep the unopened pouches for much much longer (I'm talking a couple of months) than normal deli meats, and it comes in an easy to open pack that is partially recyclable (they are nice enough to make it very clear what is and what isn't recyclable on their packaging).

The meat is...ham. What else is there really to say? The thin nature in which is shaved means that the ham feels very light but has little in the way of texture. The outer ring is a little bit tougher than the meat inside, but it doesn't really negatively affect the product (it actually introduces some texture and something for the teeth to do). 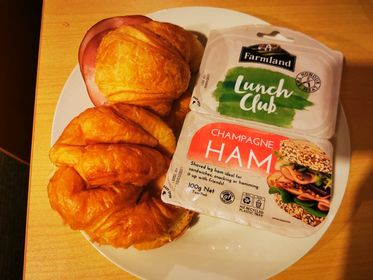 I have always wondered what the term "champagne" ham meant so before I had so much as opened the packet I had googled the term - and discovered that the main difference is that the champagne version is just normal ham with the bone removed! So there is nothing sinister or vaguely alcoholic about this product at all, merely a product that is 100% edible with no waste.

I like the twin-pack idea because it is designed to keep the contents as fresh as possible. This is important with thin-cut ham because it can dry out quickly once exposed to the air. And if you need to use the lot, there is no problem just opening the second pack. Surprisingly, there is little more packaging involved with the twin pack because a perforated division divides the two halves, each of which is independently sealed. This is an important factor in today's drive towards waste reduction, one which this company is actively promoting.

The slices are very thin, but that is all good - they can be stacked if a thicker ham slice is needed. We tried them first on their own and then with camembert on a croissant. I put two slices on to each croissant as one would not have been quite enough, and then heated them in the oven. Usually I wrap them individually in foil for reheating, but we were travelling and had limited options so I heated them in a casserole dish with a lid. Surprisingly, they were much more evenly heated with no dry bits around the edges, and the ham retained its moisture as well, so I will be using this method in future. More waste reduction too!

Four of us shared the croissants, and three of us were enthusiastic about the result. The fourth, one of our friends' adolescent sons who is suffering from recurrent growth spurts, said he could eat half a dozen and would like more ham in each one as well. However, for "normal" adults, one was enough for a breakfast or light lunch dish. We liked the idea that a pack would keep for three days once opened, but also acknowledged that this was unlikely to happen in real life. If there ever did happen to be a slice or two left over, we thought the ham would be quite nice chopped or shredded and mixed into a potato salad.

Other ways that were suggested for using it included wrapping a slice around a prune instead of bacon to make a party snack, or taking on a picnic to include in fresh tomato sandwiches. The low calorie count was a selling point for my friend, who likes to watch her diet, and she also commented on the see-through pack which means you can see exactly what you are buying.