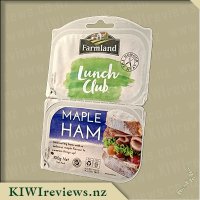 As the last of the four versions in this range for me to try, this one was left to last because, frankly, "sweet" ham is not something I really like. This one was definitely going to have to really be something special to make me a fan. It got close... very, very close. But not quite close enough to convert me.

I found myself running out of ideas on how to try the ham without repeating myself, and while there is a fair argument for repeating a benchmark recipe, I just wanted something different. So, having remembered that I still had a couple of chicken breasts in the freezer, I decided to make some Cordon Bleu Chicken. For those who have lived under a culinary rock, that's chicken breast stuffed with ham and cheese, then crumbed and fried to a golden crisp.

Lacking breadcrumbs, I just cooked them "nude" and unfortunately that led to them looking a bit dire when the cheese melted and oozed out into the pan, thus no photo attached. It was a bit of a train-wreck to look at on the plate.

That said, the dish was very easy to prepare, since the ham is sliced thinly and has 6-8 slices in each of the two pods that make up the retail pack. I only needed one pod to make two portions of the chicken, and popped the last pod in the fridge.

Because the cheese I used was a strong flavoured Gouda, it covered the Maple sweetness nicely. Plus side - it tasted as good as I could have wanted, even when reheated the next day. Downside - I basically couldn't distinguish it, flavour-wise, from almost any other generic ham. I wouldn't use it this way again, due to the cost factor alone.

Unfortunately for me, I left the second portion of ham a bit too long, and only remembered it was there after it had passed it's Use By date. Yes, "Use By" not "Best By" - there is a definite legal distinction between the two and I simply did not want to risk falling ill from food poisoning. Still, if I was going to end up wasting any of them, I am glad it was this one, rather than any of the other variants in the range.

Overall, while not my favourite of the range, it is still a high quality product that definitely has a place in the market. For those who can appreciate the Maple sweetness paired with meat, it is sure to be a hit when you are in a tight spot and need something to make tasty, posh-looking snacks at the last minute. 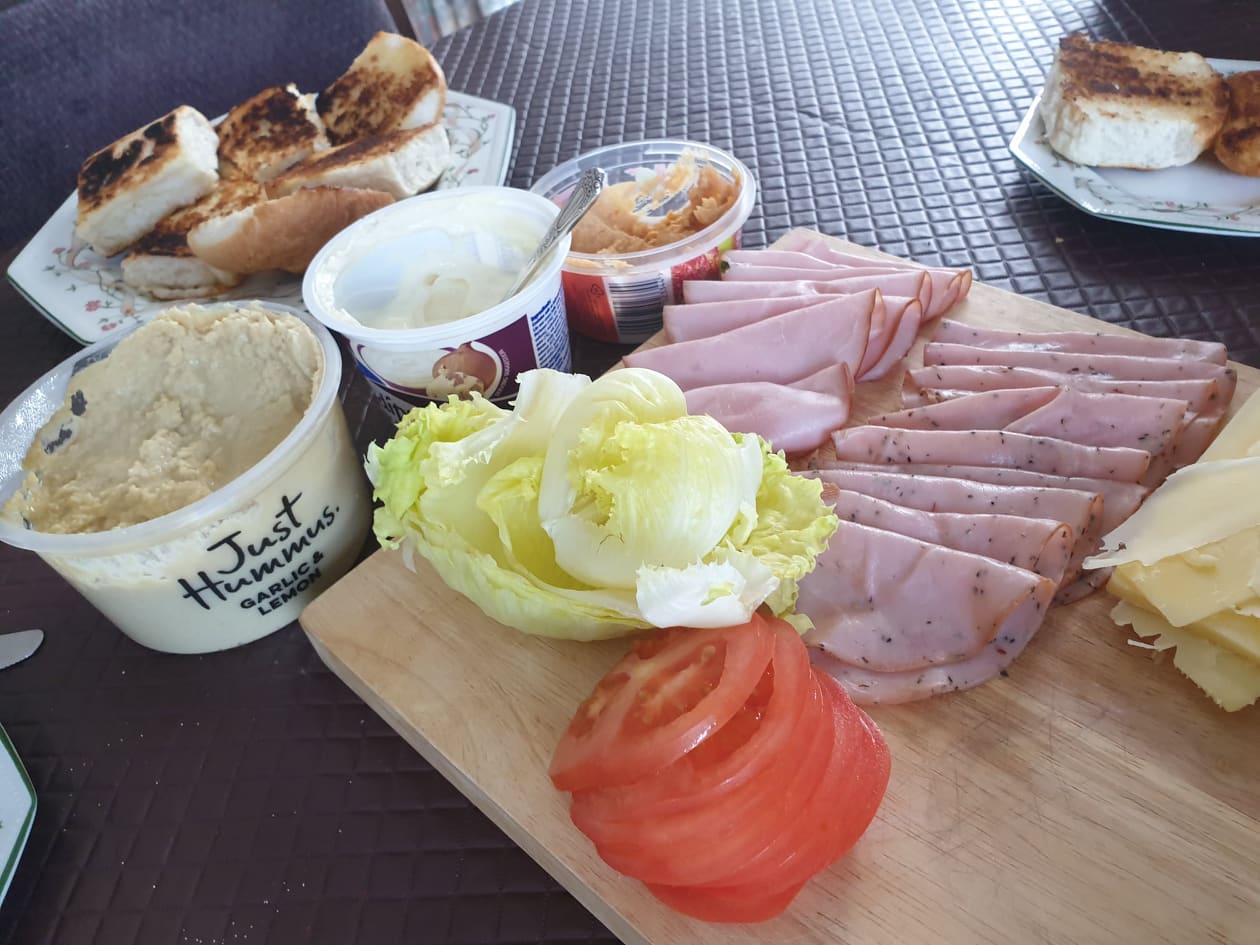 What exactly is maple ham? Supposedly a deli ham made with a maple syrup glaze on the exterior that adds to the overall sweetness of the meat. Often you can tell the ham is glazed by a noticeably dark ring around the edge of the meat, in comparison to the rest of the product. Compared to some of the other varieties like the "Bell Pepper" or "Cracked Pepper", the Maple ham is cut thicker, providing fewer slices per pouch, but more meat per slice.

What is also important to note about the Farmland brand of deli meats is that the product is made up of 80% Pork. While it seems odd for ham slices to not be practically 100% pork, ice is always added in the process of creating of deli meat, but some other brands may add so much ice that the meat is only 40% meat in the end. This is something that the consumer can usually tell when they pick up the meat and it feels wet, or if they cook the meat and it shrinks much much more than other brands (think about how different brands of bacon shrink differently). So it's pleasing to see that this product has such a high level of actual meat in their product, and it doesn't feel slimy or wet at all.

What that does mean though, is that the meat could potentially dry out faster, and Farmland has countered that with some nifty packaging that splits the meat into two separate packs to extend that shelf-life out a bit longer. Once each pack is opened you get 1-3 days to eat it, but you can keep a pouch unopened and eat it two months later and it will still be fresh (assuming you have kept it adequately refrigerated). The extra thickness in the meat does provide a more satisfying meal, and it does provide an extra bit of texture to enjoy, but it also means it runs out just that little bit quicker. If you are setting up a sharing platter for entertaining a few guests, you will likely need both pouches in the one sitting.

The flavour is nice and sweet and isn't overly acidic, so it is a product that is very much moreish. A slice here and there and it'll be gone before you know it. In a sandwich, a burger, on crackers, in a quiche; there are a number of ways to enjoy these slices. they are small enough in diameter to be used on both the dainty and hearty meals, so there is definitely a good variety of uses available. It is just a simple ham though, with a slightly sweeter flavour. It will never be something to write home about. But it'll definitely fill a hole. 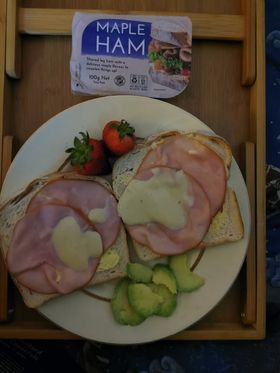 I enjoy maple syrup on all sorts of foods ranging from waffles to smoked sausages, so when I read the words "... ham with a delicious maple flavour to sweeten things up" on the outside of the pack, I was more than ready to enjoy the contents! I also liked the little logo "Honour the meat!" with the crossed knife and fork made to look like a heraldic shield, and the farmhouse graphic beside it. The effect of the package artwork was to make me think of something wholesome made from traditional country ingredients.

When we tasted the first slice, we agreed that the flavour was subtle with just a hint of sweetness, so it would be important not to overwhelm it with a strong condiment like mustard which is traditionally served with ham. This product needed something lighter so we opted for a creamy mayonnaise. I had already decided on open sandwiches with strawberries and avocado. The strawberries would add to the sweetness while the avocado would go well with the mayonnaise. Having just one slice of bread per sandwich resulted in a lighter result, and meant we had to use a knife and fork and eat it slowly!

Although the ham slices were thin, they were actually quite solid. We found that two slices were enough for a sandwich, and because they are not at all fatty the result is not too rich. As there was still plenty left, we opted to try some on a pizza with camembert, fresh pineapple, and wilted spinach. We deliberately avoided canned pineapple as it is too sweet, even when preserved in its own juice rather than syrup, and we did not want the flavours to clash. The pizza was delicious but we could have eaten double the quantity! I will know for next time.

There were three slices left so our last combination was with a Southland cheese roll. I like my cheese rolls plain because some of the other fillings people add make the result too strong. However, the ham worked nicely, complementing the cheese flavour instead of taking over. We made three rolls, each with one slice of ham, and that quantity was fine. More would have been overkill. I know the children will enjoy that combination as they have tasted my cheese rolls before, so when I get back home I plan to get some more ham and make some for their afternoon tea - that time when school is over for the day and every child has suddenly developed a raging hunger! I can pretty well predict what their reaction will be.