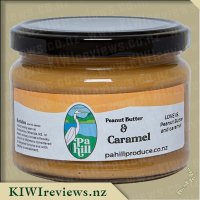 An all-time classic of Peanut Butter and caramel chunks made by us by hand.

The peanuts we use come from Argentina and are dry roasted to make the perfect texture of peanut butter. Peanut butter madness sets in and we create flavours as peanut butter is a benefit to health and has its uses to flavour and texture in cooking. People love to mix Peanut Butter with a huge variety of flavours. 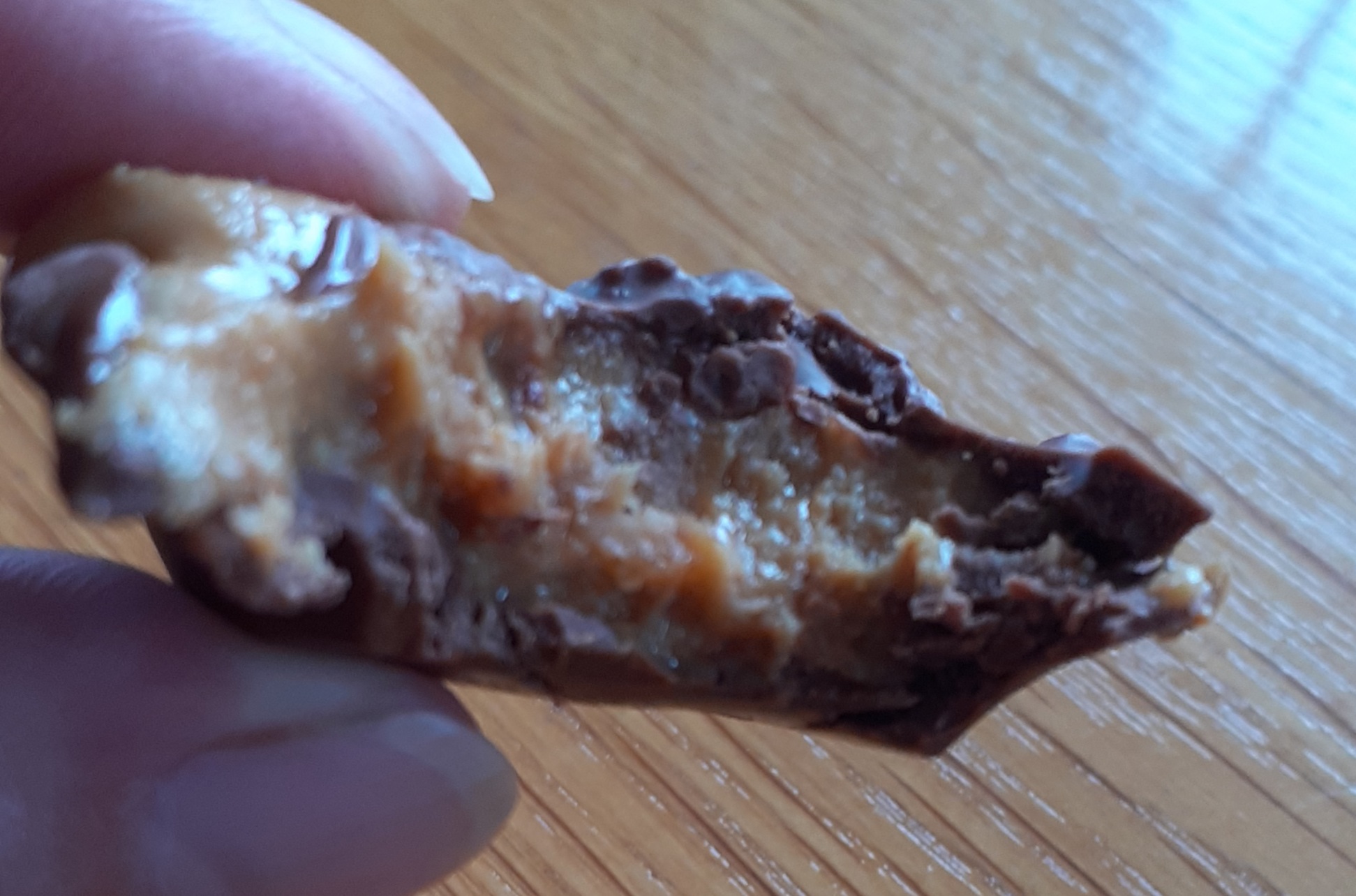 I've only started eating peanut butter in the last couple of years and am loving all the different flavour combinations that are now on the market. I love caramel so I was really looking forward to trying Pa Hill's Peanut Butter and Caramel. My sentiments were echoed when I looked at the glass jar and saw the slogan, "LOVE IS, Peanut Butter and Caramel." There are only two ingredients, peanuts, and caramel, no nasty preservatives. The shelf life is nearly one year away but after trying this peanut butter, there is no fear of it lasting that long.

Next, I decided to try and make some chocolate sweets like Reece's pieces. I melted some milk chocolate and made a base, added a teaspoon of Peanut Butter and Caramel, and then topped them with more milk chocolate. Oh. My. God! This was one of the nicest sweet treats I have had and definitely better than Reece's pieces, for the record. The chocolate, combined with the peanut butter was delicious and my girls both had to try one when they saw me testing it. They both gave them the thumbs up and I'm now in the process of trying to hide the last few before they sneak them! Pa Hill's has produced a quality peanut butter that is delicious, versatile, and now a pantry staple.

I have always grown up with families who love Peanut Butter. My youngest brother had it on practically everything and now, much to my amazement my girls are just as bad, if not worst. They along with my husband seem to get great satisfaction adding the stuff to another element so when I saw this was peanut butter and caramel I thought how could it not be a hit. As soon as the three of them saw this little jar there eyes exploded in their heads. It was basically a race to see who could get it to it first. All three made the same comment 'it was not easy to spread' and then 'there is no caramel taste at all' followed by 'I love it and want more'.

Now I think one of the reasons I hate peanut butter is the smell - it is so powerful that it make me physically ill so I was over the moon with this as the smell does not smack you in the face. You can smell the trace of peanuts but it is rather pleasant. I then looked at the ingredients which is Peanuts and Caramel - ummm feel like they lacking in some information there.

It was not long before the three of them were telling me yes there is caramel in it, just took a while to get down to it and again how much they all loved it. Although it is gritty in texture the trade off seems to be there is no oily feeling in the mouth afterwards. Also, it is more stickier than normal peanut butter but it is not as sweet as the American Brands - its the perfect consistency.

As this is my review I did have to bite the bullet and try. I could not stomach the idea of it being spread on toast or as a sandwich so took the easy way out and sliced a banana down the middle and spread into the center. I then cut into mouth size and sat down to try. With six beedie eyes watching me. I have to say it is not my cuppa tea at all and the granules were in my mouth long afterwards. The after taste is definitely one of peanuts and it is not something I would eat in a hurry again. However, my family all adore it and in less than a week it was gone.

Yes I have been told it is to be added to the shopping list. It was a total winner for my family and they all loved it. However, the price is rather excessive for the share size of it. This is only 300grams and we usually buy 375gram jars if not the larger sizes for a fraction of the price. Think it will be a once and a while item or if it is on sale as it does not last long in this house at all! (scores done by the family) 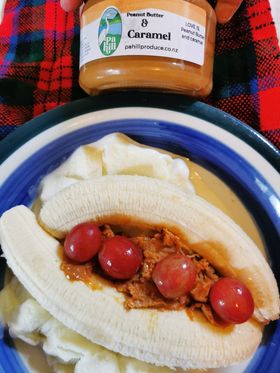 Caramel is such a great flavour. In recent times it has appeared in all sorts of guises, from fudge and other confectionery to gourmet coffee blends to preserved meat. But what a wonderful idea to team it with peanut butter. It is so good that I could eat it straight from the jar. Not that I would, of course, but when I did my usual taste test before serving it up for review, I might not have stopped at just one spoonful...

The downside was the texture. It was very thick so that made spreading it difficult. We solved that by warming it slightly and mixing in a little cream because we wanted to use it as a dessert topping on a banana split. Once we had thinned it, we were able to pour it over the halved banana and the ice-cream beneath it. It set again but that did not matter - it was where we wanted it on the plates.

Mr Three, who was looking forward to being the first to try it, was given the task of decorating each banana with grapes and some coloured sprinkles for a festive effect. He did the grapes part but unfortunately he ate some of the sprinkles and managed to drop the rest, so the result was not quite as effective as I had hoped.

However, the taste was just great. Bananas are always great with caramel; in my opinion, it is a much nicer combination than banana with chocolate. And we really liked the added flavour boost provided by the peanut butter. We had stirred the jar before starting to add it to the dessert, so the caramel was as evenly distributed as we could manage. There were nine of us altogether to evaluate the product, with ages ranging from three to 80-something, so there was a good cross-section of people to comment. The funniest comment was from my 80-something aunt who said she enjoyed it because the peanuts did not get stuck in her teeth, unlike some peanut butters!

Having confirmed that everyone liked it, I decided to use up the rest of the jar a couple of days later when we were back at home. We had the barbecue going, so I made some kebabs island-style. I threaded pieces of banana, pineapple and orange on to kebab sticks and put some peanut butter in blobs along the top of each one. As the fruit heated, it singed and the peanut butter melted into it. Not only was it even better than the banana splits, but there was nobody there to share it so we could just eat it all ourselves. Perfect!

Named after the popular city in Holland this cheese has a higher moisture content so has a slightly creamier texture and mild acidic tone which is a result of the increased moisture levels.