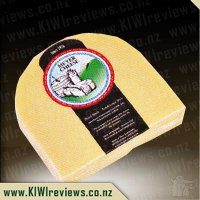 Disclosure StatementFULL DISCLOSURE: A number of units of this product have, at some time, been supplied to KIWIreviews by Meyer Cheese or their agents for the purposes of unbiased, independent reviews. No fee was accepted by KIWIreviews or the reviewers themselves - these are genuine, unpaid consumer reviews.
Available:
selected stores

Gouda cheese made with sheep's milk.

They are available in 10 and 5 kg wheels, 1kg blocks and also 150gram retail unit.

I tried this one first, simply because if you don't think you're going to like something then you get it out of the way first.

Giving this a try on some crackers with margarine I really wasn't sure what to expect since I've never had anything with sheep's milk in it before, or at least that I know of. My initial reaction to it was the it was creamy but not unlike any standard cheeses that I have had, no strong taste. But having it on it's own was quite a bit nicer, so I just skipped the cracker and nibbled on the cheese, of course I had to stop though so as to have some to experiment with.

My first experiment was just tiny, once off, which was a pikelet with a couple of slices of apple and a little bit of this melted on top, nice but not something I would make again. I used up the rest of the cheese by dicing it and adding to pureed tomatoes, spinach, onion, garlic, carrot and sauce. To keep the kids interest I made the pasta blue. Dishing it out for dinner, the kids gobbled it down. The only problem I encountered was that there were some chunks of cheese still, from the edge of the block of cheese, but these still tasted great and softened wonderfully. Was a delicious dinner that got gobbled down quickly for dinner again the next night.

I liked this, I think that I would see myself getting this again.

I was a bit intrigued about what "Sheep's Milk" Gouda would taste like as I have never had anything like it before. I love cheese and was ready for the challenge. When I tasted some small slices, my first thought was it tasted like gouda cheese. I didn't think that the flavour stood out as something different to "normal" cows milk gouda. I thought the flavour was quite bland. A bit later in the evening, I tried a bit more, this time a bigger chunk, I felt that the flavour was bit stronger (still quite simple but a bit more tasty). I think this may also be because I had had quite spicy food for dinner and I need to let my tastebuds clear a bit before trying the more subtle taste of the Sheep's Milk Gouda. When eating the cheese just as it was, I found that it left a squeaky sort of feeling on my mouth. Interesting!

For lunch, I thought I would give it a go under the grill. I sliced some up and criss-crossed it over some sliced avocado on top of some pumpernickel bread. The cheese kept its form as it heated under the grill. This would make is a good cheese if you didn't want it to melt everywhere. After grilling it, I did find that the cheese was quite leathery, however I was quite happy with that as it gave a different texture to usual cheese.

I had a look on their website and found that Meyer cheese is what they sell at the Gouda Cheese shop. I have enjoyed their cheese over the years and I am sure that I will continue to do so! The website has some lovely images of inspiration for things to do with their different cheese. I think it is worth a look in order to get the mouth drooling!