« River of Blood - Tales of the Waitoto review 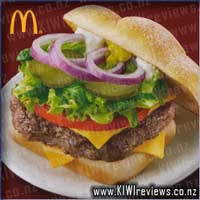 Price:
$7.20 burger only
Available:
for a limited time

The irresistible new prime Angus beef burgers are made from 100% New Zealand beef, sourced from regions such as Taranaki and Hawkes Bay.

Known around the world for it's quality and taste, Angus beef has a finely marbled texture that's rich with mouth-watering flavour, and independently verified by AngusPure Ltd.

I gave this burger a try, purely because it was new and people were talking about it. Coming in a large rectangular box, the Grand Angus was a larger size burger than what McDonalds usually sell, and the bun was similarly rectangular.

Angus beef? I honestly didn't really notice much difference in flavour. The patties seemed slightly thicker, which was nice, but the actual "Angus" flavour was not as noticeable as I had hoped. I ended up picking out a lot of the ingredients, as the gherkins overpowered everything, and the tomato was making the burger soggy. The red onions were the saving grace for me. The meat patty was incredibly greasy, which was not very appealing. I suppose there had to be a downside to having a thicker patty, but it didn't help to keep the bun firm. The onions were a thick crunch of flavour that created a nice distraction from the grease.

This is not really a burger that I would recommend, and not one that I would buy again. The flavour was overall average, and I didn't enjoy the blend of ingredients. Considering the price, I would rather stick with a Big Mac. I could even get 3 cheeseburgers for that price.

McDonald's - Grand Angus burger is yummo!! Not my first choice off the menu but whenever a new burger is advertised I am there like a shot to try them out. The Angus beef patty is huge and I love it when I am satisfied after eating a McDonald's burger, the Grand Angus hits the spot. Usually I am not a fan of the salad on the burger I am strictly a meat a cheese kinda girl but on this burger it seems to work. The slice of tomato, the raw red onion, and the lettuce that was actually green because it's the fancy lettuce leaves not just the normal sliced lettuce that wilts and goes brown, so not only did it look appealing it actually tasted good too.

I love the square bun as well, the burger just seemed larger and was a treat to eat as it felt as though I was eating a sandwich and it stayed together better than trying to eat the usual round burger bun. Just like the advert suggested the burger as just a little bit fancy and I enjoyed every mouthful of the McDonald's - Grand Angus burger.

The great thing about McDonald's is no matter which restaurant I choose to dine at I can rest easy that the burger I order will be more or less exactly the same, which eliminates disappointment...not that you would be disappointed eating a Grand Angus burger. The bun is tasty and I love the kaiser buns, they add a little bit extra which makes the burger a perfect 10/10.

Putting aside the fact you can not have a 100% beef patty (it needs other ingredients to hold it together for cooking), I do still enjoy the occassional trip to the Golden Arches. Many of their burgers are pretty boring flavour-wise, but lately they have been pumping out some promotional burgers of note. The Angus burgers have been around a while.

Of the two Angus burgers on the menu I would say that the Grand Angus is my least favourite. But it is the one my husband orders most often. For me, it has a great meat patty. Its really flavourful and feels as close to a steak as a patty can feel. Dense with meat I guess. But for me that's where the excitement ends. The bun is a miss for me. Often when they do a special "sour dough" bun its not really sour dough and this just falls to pieces as you are eating. Also the shape of the burger makes it harder to eat.

This is also going to sound really unhealthy of me, but I detest McDonald's lettuce so much and raw onion as well. So this is basically a burger full of ingredients I can't get behind. If it was me ordering I would say hold the onion and lettuce. I just hate opening a box to eat a burger and finding this sea of lettuce all over the show. You can't just pick your burger up and eat it like that. You have to reconstruct it or totally deconstruct it instead. So unfortunately, this burger is not for me. Give me a Mighty Angus any day.

As a fast food junky i am a regular Mcdonalds customer and always give a new burger a try . This burger hit the spot and was really tasty and guess what it nearly looked as good as the picture on the menu board . As far as the portion went i still was a little hungry when i left and did feel a little over charged for the burger but what is new when you leave Mcdonalds (but still we keep going back) But once again the preparation time was tops a thirty second wait . So my final opinion is if in a hurry not to hungry and got a spare dollar go get a Grand Angus burger as it a pretty tasty , and i have been back for another one or two .

McD's have released many 'promotional' burgers over the years, some turned out to be good enough to make it to the menu as regulars, some... well, they never should have trusted the word of someone...

Thankfully, this is one of those burgers that deserves to remain on the menu, despite it's overpriced nature... so, in the logic of all that is commercial... it probably won't last long. "Make 'em beg for it" mentalirty plays high-card in the food industry these days it seems.

The beef patty is astounding... unlike most meat patties, this one *actually* tastes like real meat! Genuine beef, even! It's a little too fatty for my tastes, and because I prefer to gobble down the fries first, the patty had cooled and the fat had started to clot in the bottom of the box, making it a little off-putting... so eat this fresh and hot for best results!

I has asked for "no pickles" on mine because it's one thing to have them lost in the mustard-&-onions of a cheeseburger, but with the sauce on this burger being lighter (mustard and mayo) I didn't want the pickle coming through. The red onions are also quite a strong flavour, being as they are, served raw... so you may want to take that into account when ordering too.

The bun is one of those fancy 'plaited' style bunsd that look so nice and dinky... and fall apart into little mini-buns as soon as you try to pick it up.

The rest... well, -meh- it's all pretty standard fare really... shredded lettuce, musht tomato, wilted processed cheese... all the ingredients you see in the picture, and of course the final product looks *nothing like the picture!* So, what's new there...

Overall, about the only thing they got right on this was that delightfully full-flavoured patty... yet, strangely enough, I still find myself wanting another one... I wonder if they would sell me just the patty, and I'll take along my own bun and fillings... -hmmm- Must try that idea...