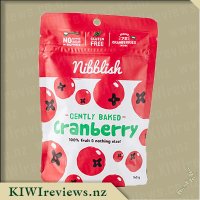 Disclosure StatementFULL DISCLOSURE: A number of units of this product have, at some time, been supplied to KIWIreviews by Nibblish or their agents for the purposes of unbiased, independent reviews. No fee was accepted by KIWIreviews or the reviewers themselves - these are genuine, unpaid consumer reviews.
Available:
via online store and in supermarkets

Dried cranberries are often flat and full of added sugar because they are the leftovers from when cranberry juice is made. We like to be different and Nibblish cranberries are grown to be eaten!

So we leave the juice, with all its goodness and flavour, in the berry. Like all our fruit there's no sugar or chemicals added - all we do is gently bake them, so it makes great nibbling for you!

Typically when I've had cranberries, it has been as a juice or inside of a fruit cake, I have always enjoyed the flavour but find that the juice can be a tad tart and in the cake can be a little too sultana like. Picking up the packet I could immediately tell that these were nice and soft and so I couldn't wait to give them a try. My eldest had one but decided that they didn't like the flavour but that the texture was good. My 11 and 9 year olds both declared that these were absolutely delicious and would have finished off the whole packet right there and then if I had allowed them to.

Giving these a try myself, I thought they were delicious, they had great flavour, were so nice and juicy and had great colour to them. The younger two and I were quite content to just sit there and snack away on these, which ended up meaning that we didn't try them in anything else. I love that I can seal this back up again, it would be perfect for popping in my bag and taking out with us, the only downside we found to these, was that they were a bit sticky, so we would need to take wipes with us (but I always have wipes in my bag, so that isn't a big issue). No doubt we will be buying these again. 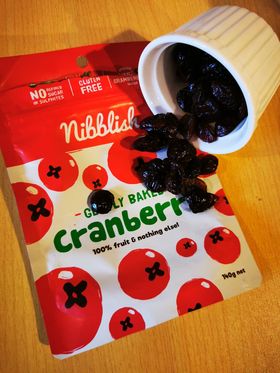 Cranberries are an acquired taste; I love them but my partner is not so keen. When we opened the pack, I was the one who dived in headfirst to taste them but I was in the minority - none of the other three present (partner and another couple) were impressed. But then I like raisins and dates too, and again I am the only one, so that says more about their preferences in general than the product itself. No problem; I was quite happy to eat the entire pack on my own over the course of a few days, and I am still in the process of doing exactly that.

I love the packaging. It is bright, colourful, shamelessly proclaiming that each packet contains around 75 berries. I would like to have counted them just to see how accurate that was, but it was quickly pointed out to me that the word "around" was clearly visible, and that might mean a different variable depending on who was reading it. So I accepted that advice and did not try to check the numbers. However, I had tipped some out of the pack and into a small dish for sharing, so it was clear on a visual check that there were certainly lots of berries. The packet can be resealed so it ensures that the fruit will stay fresh if not used at once.

The texture was nice - almost like a cross between a raisin and a sultana. I had expected that they would be hard as dried cranberries do tend to be quite leathery, depending on the brand. However, the addition of apple juice had obviously helped to hydrate them, and the relatively lower acidity of the apples would also cut through the tartness. Although there is no added sugar in the product, it is sweet enough to appeal to most young palates, and I imagine children would enjoy these berries as a snack. That is a bonus for young teeth as well - obviously, there is still a fructose component, but nowhere near as much sugar as there would be with additional sucrose incorporated.

Because I had most of the packet to myself, I had fun trying them in different ways. Usually when I have to share I need to ration what everyone has, and even then it is hard to incorporate review products into different recipes. Straight from the packet was a given; they would be perfect on a tramp, either on their own or as part of a trail mix. But I stirred a couple of spoonfuls into my breakfast oats, added a few more to some home-made pikelets (which the other three loved, not realising I had included the cranberries - they thought they were currants!), and mixed some into a banana smoothie. This was quite something; not only did the cranberries add flavour and texture, but they changed the colour slightly so the smoothie looked grey! Not what I had expected, but interesting and quite different. I still have some left so my next venture will be to include them in baked muffins along with some apple slices. I have a feeling that this idea will be successful too. 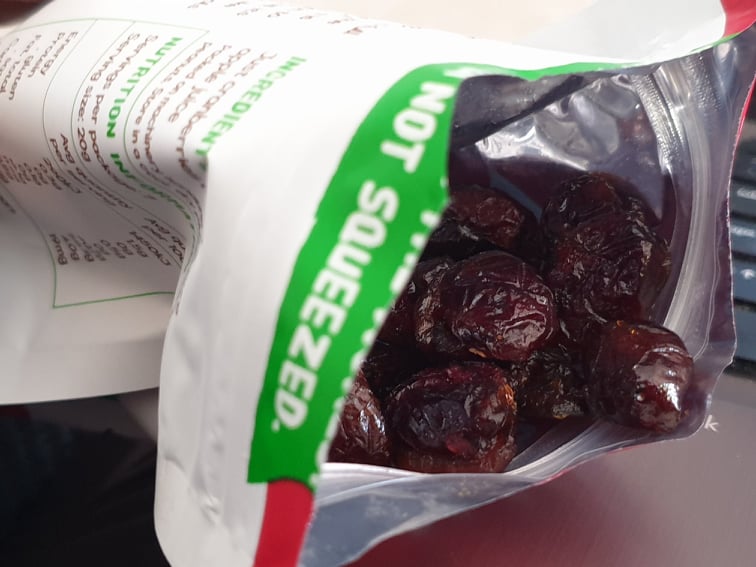 Out of all the varieties that I have recently tried (pineapple, mango, and cranberry), it was these cranberries that actually looked like what I was expecting to see. Perhaps because I've seen dried berries before but this cranberry product is a little different to the other two varieties.

The first difference, is that this is the only product of the three that has an additional ingredient. Pineapple only has pineapple in it, the Mango variety has only mangoes in its ingredient list, but here the Cranberries are not the only ingredient 25% of the weight of the product is made up of apple juice. It's an interesting comparison to make considering Nibblish make a point of saying that other people often use cranberry fruit that has had the juice squeezed out, whereas Nibblish leaves "that goodness and flavour in"...and yet it still requires an additive to bump that sweetness up. Either way, it ends up with 58% of the weight of the product being comprised of (naturally occurring) sugars. Not too dissimilar from the other two varieties that don't need the apple juice.

The second difference is potentially a consequence of the apple juice; the texture of the product. There is a slight stickiness to the product (which is considering how contained the juices are in the actual fruit). Where the Pineapple and Mango varieties had been dried to the point that they appeared dusty on the surface and you could handle them for extended periods of time without getting your fingers messy, these cranberries are slightly stickier and do leave a residue on your fingers when you handle them.

The flavour is very strong and intense though, and the apple does do a lot to make the flavour much more manageable; more sweet than tart. But it is strong enough of a flavour that you can only have a few at a time before it overpowers the palate and you need to take a break from them. That is mirrored in the recommended servings per pack, with this pack having nearly double the servings compared to the other two. Prevents it from being too moreish, but does mean the pack will last better.

As with the other varieties, the packaging is bright and cheerful, but very child-like. It's an interesting choice as a smaller pack would be great if we were looking for a pack for a kids lunchbox, but with multiple servings and a resealable packet, it certainly seems more directed at adults, despite the bright exterior. Regardless, very tasty, and good value for money when you compare the usual price of pick and mix supermarket dried fruits.

Boneless chicken breast filled with cheddar cheese and ham and coated in a multigrain crumb.