The Chronicles of Aden Weaver - 3 - The Last Tree review

ProdID: 8759 - The Chronicles of Aden Weaver - 2 - The Sasori Empire
Written by Yvette Carol 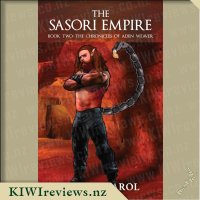 The Chronicles of Aden Weaver - 2 - The Sasori Empire product reviews

Mystery arises around the identity of Aden Weaver's father. Is Aden really the son of Kal? When Chief Wako, the scorpion shape-shifter and leader of the criminal Sasori Empire, gets his clutches on the Or'in of Tane, Aden and his friends - now members of the Order of Twenty-four - leave the Lost Island. Their mission: to retrieve the relic from the stronghold of the Sasori

In the wild Land of Fire and Ice, the young heroes face terrifying mythological creatures, giants, and river demons. As they close in on the Or'in of Tane, Aden has to follow his astral mentor between worlds and utilize powers he never knew he had.

After I had finished reading this book, I passed it on to Mr 12 who was keen to see what might happen in the second story about Aden Weaver and his friends. Having both enjoyed the first volume in the series, we had been looking forward to continuing with Aden on his journey. For each of us, there was that sense of familiarity in re-entering the realm of the shape-shifters, and we speedily adjusted to their exotic world. Losing yourself in a book is always fun, and this series definitely requires the reader to relax and just go with the flow.

I found this book easier to read than the first in the series, possibly because I already "knew" the protagonists and had an idea of what to expect. There were some new characters, but they were not all introduced at once so there was the chance to get familiar with each one. It was also helpful that there was a reprint of the whole of the final chapter of Book 1 added as a foreword to Book 2 - this would be wonderful for anyone who was not reading the books in quick succession.

Once the story proper has begun, it progresses at breakneck speed through a series of adventures as Aden and his friends continue to seek out the Or'in so they can return it to its rightful place. Only then can the proper order be restored and the Lost Island saved. They also continue the search for Aden's father as there seems to be some reason that his identity has been kept secret - although other people appear to know a lot more about Aden's origins than he does himself.

Mr 12 was jealous of Aden's special abilities. He could think of all sorts of ways in which astral travel could be useful, and he was also keen on the idea of being able to fly. Shape-shifting would be great fun, although some of the ideas he came up with (like turning himself into a flea and biting his friends while they were asleep) were antisocial to say the least! I told him he would risk getting squashed, or even poisoned if the friends he visited had automatic insect zappers installed, so he went off the idea after that.

Both of us felt that the character descriptions were excellent. We could really picture the revolting Chief Wako with his loud snores, his muscular arms, and the rank odour of his unwashed body. Mr 12, who is quite fussy about personal hygiene, was suitably disgusted at the idea of having to go too close to him. And Number Three, the girl who has been added to Aden's team without any warning, is wonderfully described as a supercilious know-all who thinks the rest of the friends are beneath her. However, as a praying mantis, she is not welcome in their group; her kind are enemies of the dragonflies and not to be trusted! Nevertheless, she is a martial arts expert and as such is vital to the cause so everyone tries to be nice to her.

I think this book would be quite hard to follow if we had not first read Book 1. It also ended in a cliffhanger so both of us were pleased that we had the last book in the series ready to go. At the same time, I appreciate that the story has been split over three instalments because the individual books fit easily into a backpack and it makes them more accessible. But regardless of format, they are certainly an entertaining read.

Haunted by the ghosts of their past, chased by deadly competitors, Dan and Amy can't see who is an enemy and who is a friend. Their blindness ... more...