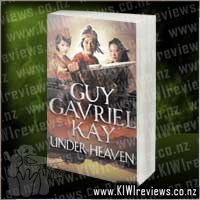 Disclosure StatementFULL DISCLOSURE: A number of units of this product have, at some time, been supplied to KIWIreviews by HarperCollins or their agents for the purposes of unbiased, independent reviews. No fee was accepted by KIWIreviews or the reviewers themselves - these are genuine, unpaid consumer reviews.
Available:
April 2010

Under Heaven...takes place in a world inspired by the glory and power of Tang Dynasty China in the 8th century, a world in which history and the fantastic meld into something both memorable and emotionally compelling.

In the novel, Shen Tai is the son of a general who led the forces of imperial Kitai in the empire's last great war against its western enemies, twenty years before. Forty thousand men, on both sides, were slain by a remote mountain lake. General Shen Gao himself has died recently, having spoken to his son in later years about his sadness in the matter of this terrible battle.

To honour his father's memory, Tai spends two years in official mourning alone at the battle site by the blue waters of Kuala Nor. Each day he digs graves in hard ground to bury the bones of the dead. At night he can hear the ghosts moan and stir, terrifying voices of anger and lament. Sometimes he realizes that a given voice has ceased its crying, and he knows that is one he has laid to rest.

The dead by the lake are equally Kitan and their Taguran foes; there is no way to tell the bones apart, and he buries them all with honour.

It is during a routine supply visit led by a Taguran officer who has reluctantly come to befriend him that Tai learns that others, much more powerful, have taken note of his vigil. The White Jade Princess Cheng-wan, 17th daughter of the Emperor of Kitai, presents him with two hundred and fifty Sardian horses. They are being given in royal recognition of his courage and piety, and the honour he has done the dead.

You gave a man one of the famed Sardian horses to reward him greatly. You gave him four or five to exalt him above his fellows, propel him towards rank, and earn him jealousy, possibly mortal jealousy. Two hundred and fifty is an unthinkable gift, a gift to overwhelm an emperor.

Tai is in deep waters. He needs to get himself back to court and his own emperor, alive. Riding the first of the Sardian horses, and bringing news of the rest, he starts east towards the glittering, dangerous capital of Kitai, and the Ta-Ming Palace - and gathers his wits for a return from solitude by a mountain lake to his own forever-altered life.

The big book of everything for boys
Rating: 9.5

I tend to know a book is good when I put it down and then realize it is 5:30am. This story, of the young second son, Shen Tai, his family and the fall of the glorious Tang empire was as sprawling and exciting an epic as any English or European historical fantasy. Based on a considerable amount of research, this story immerses the reader in the danger, subtlety and opulent splendour of one of China's 'golden ages'. So different, yet containing the same human passions and failings, it was I book I simply couldn't put down.
A warning if you intend purchasing this for a younger audience, however, there is a LOT of sex (though none of it terribly explicit). I noticed this fact, though it blended well into the story and probably reflected a truth of the times - women had little else with which to control their future. This was well balanced in the story telling by four very powerful female characters who walked very different paths but all maintained their own integrity. My favourite by far was Shen Tai's younger sister who is sent into the steppe as a tribute bride, only to discover a most unusual rescue awaiting her. Her stubbornness coupled with the ability to show grace made for a wonderfully appealing read.
All in all, this story captured the romanticism of a period in history I previously knew little about. My education has been most enjoyable.

Two in one! A laugh-out-loud modern take on The Three Little Pigs, along with a play to perform.

Everyone knows the classic story, but playwright Roger Hall has penned a funny, modern version, along with the same story in play format, to be performed at home or in the classroom.