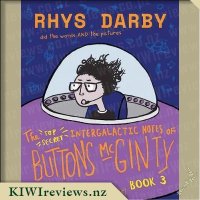 Comedian Rhys Darby delivers more words AND more pictures in his third hilarious book for kids! Buttons McGinty is back and once again he's travelling through space and time. He found Dad in the second book of the series, but now they are on the trail of Mumsy, who is being held by the evil Queen Zankerflorna!

Join Buttons and his friends as they enter a universe unlike any you have seen before. This time Buttons and the gang are solving mysteries with morse code and cryptic hieroglyphs! A full-on mystery-comedy series that will have Darby's fans glued to their seats!

Suitable for readers aged eight and over.

I am very aware of who Rhys Darby is through his films and stand up comedy but I can't say I knew he was an author and illustrator as well so when I saw this book I thought it must be good if he is involved. If you haven't read the first to books in the series it is ok because there is a catch-up section before this book starts filling you in on the previous events in the first two books but after reading this it would be wise to acquire the first two books because I know there will be tons of humour packed into them.

The Illustrations in the book are very simplistic but contain some very good facial expressions and details around the pictures so you get a very good idea of what is going on. The story revolves around Buttons Mcginty and his friends on a mission to try to rescue his mother by travelling through space to track her down and put a stop to Queen Zankerflorna. There are morse code sections throughout the story and to decipher them there is a Key at the back of the book to work out what symbols mean what letters which gives the story a bit of interactiveness and a sense of achievement when it is cracked. There are also Hieroglphs symbols in the story which also have a key at the back of the book to figure out. This is a very child-friendly book and It is funny to watch children trying to pronounce some of the names Rhys has come up with for some characters which are beaming with personality.

This is a great story that the kids absolutely loved but unfortunately, this is the final chapter in the series so I hope Rhys Darby has had success in these books and can continue to produce other books in the future because he is a very talented humorous man and I really enjoy everything he is involved with. This book is very much like the man himself as it is quirky, zany and full of energy.

This was my first introduction to Buttons McGinty, but I was hooked in long before getting to the story itself. I stopped dead at the Copyright Page and started laughing. Often this is a page that gets skimmed over as the reader is bent on getting straight to the story proper, but this is one that is meant to be read and enjoyed. First, the author refers to himself as "Genius at Large, 2020". Then he names the Pesky Meddlesome Editorial Team - each with an individual descriptor preceding their surname in place of a given name. Thus, we have a Strategic Field Marshal, a Chief Word Wrangler, and an Administration Lieutenant. It goes on in similar vein, much to my delight.

Having read the rest of the Front Matter pages in case I had missed anything, and taken note of the warning notice about how to respect a book, I finally got to the "real" section. It begins with "STUFF you probably should read before starting the story" - a useful set of information for people like me who are about to dive into the series at Book 3 rather than Book 1. I found that extremely helpful and was then able to tackle the first page without feeling I had missed something. Naturally, it is good to start a series at Book 1, but for various reasons that is sometimes not possible.

The style is very kid friendly. After all, the title of the book includes the word "notes" which means it is not going to be a conventionally organised story with separate chapters and the occasional illustration. Instead, it is more like the notes a child might write in rough complete with side comments, graffiti, and plenty of colloquial language. I also like the humour (which ranges from clever to groan, often in the course of one page) and the inclusion of an introduction to Morse Code (complete with exercises) and hieroglyphs (with their equivalent in Modern Latin script, as used for English and many other modern languages).

The story follows Buttons' quest to find and rescue his mother (Mumsy). When he finally finds her (and gets himself captured in the process, of course) the most important question she can think to ask is when he last took a bath. Add in a surprise ending, and you have a book that will be read several times over. It is seriously funny!

After I had finished it, I asked my friend's nephew (aged 11) to take it home for a couple of days and then tell me his impressions. It was four days later when he got back to me. Knowing he is a fast reader, and had already read the other two books in the series, I had expected him back sooner. So I asked him why he had needed that long. He gave the book back and told me to flick through the pages. He had worked through all the Morse code and hieroglyph entries and written in the translation - in pencil, in case I wanted to erase them again so someone else could have a go. He also told me he pretty well knew the Morse code now and was going to try it out on his friends. The hieroglyphs were a bit harder as he is the first to admit he cannot draw, so he is now off to see if he can find a computer font he can use instead.

Miss Eight now wants to read it so I will be passing the book on to her as well. After I have gone through and removed the pencil marks in case she wants to try the puzzles as well, of course. I will be interested to see what she thinks of it.

May the Force be with all aspiring Jedi cooks as they use Yoda, Darth Vader and R2-D2 shaped cookie cutters to create 30 sweet and savory treats!

From Chocolate Chewies to Obi-Wan Tons, this galactic cookbook features easy-to-make recipes for Star Wars-themed treats that will delight any Jedi appetite.