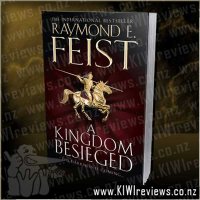 Disclosure StatementFULL DISCLOSURE: A number of units of this product have, at some time, been supplied to KIWIreviews by HarperCollins or their agents for the purposes of unbiased, independent reviews. No fee was accepted by KIWIreviews or the reviewers themselves - these are genuine, unpaid consumer reviews.
Available:
March 2011

Discover the fate of the original black Magician, Pug, and his motley crew of agents who safeguard the world of Trigia, as prophecy becomes truth in the first book of the last ever Midkemian trilogy.

The Darkness is coming! The Kingdom is plagued by rumour and instability. Kingdom spies in Kesh have been disappearing - either murdered, or turned to the enemy side. Information has become scant and unreliable; but one thing appears clear. Dark forces are on the move! Since Pug and the Conclave of Shadows enforced peace after the last Keshian invasion, the Empire has offered no threat. But now factions are rising and Jim Dasher reports mobilizations of large forces in the Keshian Confederacy.

As the men of the West answer the King's call to muster, Martin conDoin - left as caretaker of Crydee Keep - will suddenly be confronted with the vanguard of an invading army. He reminds himself that he is a year older than his legendary ancestor, Prince Arutha, was when he stood firm against the Tsurani invasion, but Arutha had an army to command, and Martin is left with old men and young boys. Massive events are about to unfold, events which threaten the future of all human life in Midkemia!

Old foes thought long defeated return to threaten from the shadows as the next generation of the conDoin line are about to begin their baptism of fire. New characters are introduced and old ones revisited as the stage is being set for an epic confrontation between the Conclave and "The Darkness" in this first book of the new Chaoswar Saga.

The conDoin family are yet again called to serve the Kingdom as a massive invasion force turns up on their very doorstep. Martin, the middle child of the current generation of conDoins has grown up on legends of Prince Arutha, and is suddenly standing in his very shoes defending the same castle, although this time the odds are stacked mightily against him and re-enforcements seem to be his only path to victory.

As one of my favourite authors, Raymond E. Feist again delivers an impressive opening to this new trilogy. I particularly enjoyed the storyline thread from the perspective of "Child". The raw savagery of base instincts warring against the call to higher evolution and purpose. There's plenty of mystery surrounding the origin of "Child" and also veiled hints of further twists yet to come.

The book refers often to the rich and colourful history of Midkemia as detailed in Raymond E. Feists earlier works, and if I had one complaint it would be that as this book follows his other series chronologically, there are some plot spoilers for those who have not yet read intervening trilogies. I was torn between the lack of background offered at some of the historical references, and a new desire to catch up on any trilogy of his that I had missed thus far.

Raymond E. Feist has begun to weave another enthralling tale combining elements of duty, heroism, sacrifice and love, peppered with interesting characters and a hearty dose of political and military strategy. Highly recommended to all Fantasy fans, and to any that enjoy a master storyteller at work.

As her husband, Richard, desperately searches for his beloved, who only he remembers, he knows that if ... more...