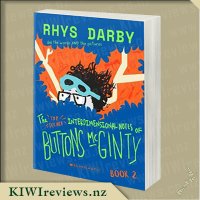 Comedian Rhys Darby delivers more words AND more pictures in his second hilarious book for kids! Buttons McGinty is back and this time he's travelling through space and time...in search of his parents (missing, presumed missing).

Join Buttons and his friends as they enter a universe unlike any you've seen before. Once again, Buttons is using Morse code to help solve the mystery of his missing parents.

The Top Secret Inter-dimensional Notes of Buttons McGinty was not a book I would normally pick up to read. But with it being written and illustrated by Rhys Darby, a comedian who I liked and respected to watch, I thought why not give it a try? My oldest daughter just turned 8, so I thought it would be a good book to read with her together.

We haven't read the first book, but dove right into the 2nd book after reading a short review on Book 1. It's about a 12 year old boy who travels through space and time in search of his parents who are presumed missing, as they were in Book 1. Being a different sort of book to what we are used to, it did take a few days and attempts to get into it. The first few pages goes back to Book 1 to explain what happened. It's a journal with sketches of what he sees, which is the part Miss 8 loved the most as it's what she loves to do too. The pages aren't full of words and mixes well with the sketches throughout, and it made it easier for her to read, and it kept her interested while I was reading out loud.

He takes us on a journey to find his parents, often endangering his own life to do so. He endures crisis after crisis with help from friends we are introduced to. I liked how the book showed Button's fears and stresses just like any other normal 12 year old, and his loneliness without having his parents around is countered by the silliness and makes for a lighthearted read. This book was great to show Miss 8 about Morse Code, which led to a little study on that subject which was a great segway to extra learning. We will keep the graphic hieroglyphics study for another day!

Rhys Darby has captured the mind of a 12 year old boy with ease, and this book is hilarious to read with Miss 8. It still isn't a book we would normally read, and I'm not sure we would go read Book 1 after this. But we did appreciate that being a stand alone book, we didn't miss much by not having read Book 1 before. It is something that we would buy for others though who do like this action/comedy/sci-fi adventure book.

I would say it is a great introduction to chapter books as it isn't too intense, and the pages aren't filled with words. A fair step between a chapter book and a comic book.

The top-secret interdimensional notes of Buttons McGinty Book 2 written by Rhys Darby is a book about the adventures of a 12-year-old boy looking for his parents that are missing, presumed missing in another dimension far from earth.

Buttons enters a portal to the other dimension in search of his parents. He meets a number of interesting characters on his travels, some friendly and some not so. The queen Zankerflorna and her army of Helm guards and Yowies have plans for universal dominance but Buttons and the dorm 4 gang are trying to find Buttons mum and stop Zankerflorna's plan. Buttons has the Blade Of Runsun which Zankerflorna needs to fulfil her plan.

The Colonel, a gigantic owl, Hunu the Forrest Warrier, her donkey Mr Plops and Ron Lozenger befriend Buttons and all in their own way help Buttons get into the Helm to foil Zankerflorna's plan and to save his Dad.

We found the book a little hard to follow in the beginning as it is written in the view of Buttons as he experiences Helmshirevilleland. It jumped around a bit but once Buttons had explored the town more and got into his mission it was a little easier to follow.

It was interesting to read a book with kiwi slang used and the little notes to readers not from New Zealand explaining the meaning of the term. This added interest to the book for us as it was written in terms my son related to. I also loved the flowers Buttons draws to calm himself down. I thought this was a cool touch to the story.

After winning the brutal Hunger Games, Katniss Everdeen returns to her district, hoping for a peaceful future. But Katniss starts to hear rumours of a deadly rebellion against the Capitol.

A rebellion that she and Peeta have helped to create.