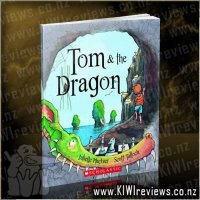 Tom and the Dragon product reviews

A charming twist on a cautionary tale!

This is an enjoyable, friendly easy to read book about a boy (Tom) whose mother warns him about the dangers of playing with a dragon. Tom is filled with fear after the horrible rhyming tale his mother told him and panics when he is confronted by the dragon at the waterfront.

This is where the story takes a charming twist and the dragon is petrified of Tom, as the dragons mother herself had warned her son of the dangers of playing with little boys. Tom and the dragon become firm friends and then Tom's mother and the Dragon's mother learn to put their differences aside.

This book is great for kids who are scared of monsters, and shows a softer side of an often scary fairytale. My son liked this book as it is quite 'boyish'. Overall a very enjoyable book, would definitely recommend.

When Hollie Chips and her mum move to Puriti Road, Hollie is baffled by the way her neighbours all keep to themselves.

But Hollie is a remarkable little girl, and it isn't long before she has charmed her way into their lives - and when she discovers that a dastardly businessman is trying to buy up their houses to bulldoze them and build a dog food factory (which he has told them will be an orphanage!), the neighbours have to band together with Hollie and her mum to outwit him!