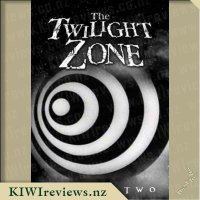 A comprehensive collection of mystical tales where people try to solve their problems using their own unique ideas.

I joined Rod Serling in twentynine more journeys into the Twilight Zone, some cheesy, some easy to predict and still some that managed to give an ending that wasn't totally expected. Whilst the majority of the guest stars were unrecognizable to me (predominantly because I never watched anything else they were in) it was fun to see the original Darren, from Bewitched, in an episode that must have given ideas to What Women Want and William Shatner who didn't overact as much as I had expected, given some of his time as Captain James T Kirk. However there were plenty of moments where the acting was a bit cheesy, by today's standards but it never detracted too much from the overall plot of the episodes.

There were a few episodes that easily made me think of movies and such of recent years that could have gotten some ideas from this, such as Twenty two which really had me thinking of the Final Destination films. Another good episode featured a djini and the granting of wishes, but not with the ease one would hope for nor the endings the main characters wished for. Mr Dingle, The Strong, is an example of one of the episodes that felt a little more silly than others, more for what the aliens were dressed in and how they looked, but this can be forgiven due to budgets and special effects. I think the most amusing moments on these discs is that it features a few episodes where, at the end, Me Sterling recommends a cigarette brand and claims that he's doing so freely...

I don't think I enjoyed this season as much as the first, but I can't wait to see what season three has in store for us and the Twilight Zone.