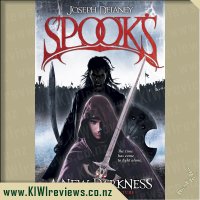 Disclosure StatementFULL DISCLOSURE: A number of units of this product have, at some time, been supplied to KIWIreviews by Penguin Random House or their agents for the purposes of unbiased, independent reviews. No fee was accepted by KIWIreviews or the reviewers themselves - these are genuine, unpaid consumer reviews.
Available:
June 2014

Thomas Ward is the local spook - it's his job to protect the county from things that go bump in the night. But this is no ordinary haunting, and he finds himself on the path of a dangerous beast that is looking to kill again.

He soon realizes this beast is just the beginning. An army of monsters is massing in the north, and it poses a threat to all mankind.

Spook's: A New Darkness is the first book in The Starblade Chronicles which follows on from Joseph Delaney's 13 book series, The Wardstone Chronicles. This is the first book that I've read by Joseph Delaney and while it would have been useful to have read the other books in the Spook's series, it's not completely necessary as the author does touch on some past events to help us understand the story and characters.

This book follows Thomas Ward who is the new Spook of Chipenden after the death of his master and it's his job to deal with any creatures of the dark such as: witches, boggarts, ghasts and any other beasties that threaten the villagers in his territory. In this book Tom takes on a female apprentice which is something completely unheard of and together they encounter a new threat to the County and the rest of humanity.

The book is written in the first person which I'm not usually a fan of as I think it's quite limiting as it only tells the story from the view of the person telling it. In saying that, there were a couple of chapters which were told from the view of Tom's apprentice, Jenny, which provided some insight into her character. I found the pacing of the book to be a bit unusual. It started off strong and compelling before petering off as the story deviated from the main plot line and then finishing with a strong cliffhanger ending which left me wanting more. It did feel like there were a lot of filler chapters and while they provided some insight into the main characters, it did detract from the overall excitement of the book. The characters were well developed as was the world in which they live which has an olden day England feel about it.

The book would be suitable for ages 11+ but be prepared for a bit of gore and a good scare. I'll be looking forward to the next book in the series and I can't wait to see how the story is going to progress.

For four novels, Clive Cussler has charted the exploits of the Oregon, a clandestine spy ship completely dilapidated on the outside, but on the inside packed with sophisticated weaponry and intelligence-gathering equipment. Captained by the rakish, one-legged Juan Cabrillo and manned by a crew of former military and spy personnel, it is a private enterprise, available for ... more...