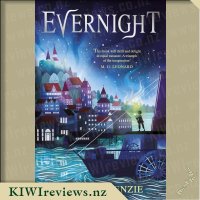 Thousands of years ago, the Evernight came to the Silver Kingdom and turned everything to darkness and chaos. It was only defeated thanks to the skill and bravery of the Witches. But now the Evernight is about to return, released by the evil Mrs Hester, and the only spell that might stop it is lost, deep below the great city of Kingâ ™s Haven.

Then orphan Larabelle Fox stumbles across a mysterious wooden box while treasure-hunting in the cityâ ™s sewers. Little does she realise she is about to be catapulted into an adventure, facing wild magic and mortal danger â" and a man who casts no shadow . . .

When I read the blurb for this, I was more intrigued by the half clock-work bird above it, the idea for the story itself was full of components that I have already come across numerous times in books, but it is fantasy, so I sat down to give it a read. The majority of this book takes place in the slums, where Lara lives and makes her livelihood beneath it in the sewers and some at the palace which feels just as dark and dank. Such is the description of this world though, that when we get to a giant tree (where there be witches), it comes across as so stunning and such a world apart, the imagery was wonderful and the images that sprang to mind had me wishing this book could have been illustrated.

This book does have themes running through it which are a lot darker than some middle fiction I've read, the very first chapter involves a murder, the second chapter a character being ganged up on. Throughout the book there will be deaths, attempted murders and moments which could scare some younger readers, so I would aim this at no younger than a ten year old (depending, of course, on what they can cope with). The villain is suitably cruel and unlikable, our hero on the cusp of child to young adult and the shadow less man, whilst undeniably bad, does bring out a tinge of feeling sorry for him.

What stuck out most of all in this book, is its magic. Yes, they have wands, but not as we know it. In order to perform magic the witches must draw images of what they want their spell to be, before burning it and reciting a poem. It then gets turned into a liquid and bottled. Here's where I couldn't quite summon up an image until nearer the books end, but the wands have a chamber (much like a gun) which these bottles get loaded into and then fired. This gave so much more of a fighting feel and more of an edge of danger as you could run out of magic, or your bottles broken and thus be defeated.

This took me a little to get into but once I was I was on a wild ride and I enjoyed it.

Four fabulous fishing stories, from the funny to the fairly outrageous!

From a story about an eel that grows too big for the house, to one that teaches a cruel lad a lesson he'll never forget, to a story of a mystery monster with lashing tentacles and a fondness for snitching fishing rods, Sherryl Jordan's collection of fantastic fishy tales holds appeal across the board.