« Blinded By The Light review 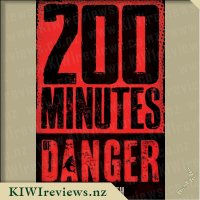 Quinn gets thrown overboard into an icy ocean. Can he outwit the circling shark? Ashling is watching a history-making science experiment-but it's about to go horribly wrong . . . Oscar hides from two secret agents while something much more dangerous hunts all three of them!

I hadn't seen this book come in store but I have reviewed one of his books, 300 Minutes of Danger, five years ago and enjoyed it, so I figured why not? 200 Minutes of Danger follows the same theme, this gives us ten stories that take place over only twenty minutes, just enough time to give you a quick lead up and then straight into action and danger, as each leading child's life is in literally in danger. All ten stories end up linking to a single ship that ends up colliding with something in the ocean, going between kids who end up off the boat and in the water, the item that they crashed into or the mysterious creature on board.

These were very fast paced, you don't need to finish the book in one sitting, however I did because I had the time and as this is aimed at people far younger than me, I could easily finish it much quicker. One of the stories did end rather abruptly, so I did need to back away from the book for a moment, otherwise my brain wanted to read the next story as a continuation of the previous and that just didn't work. It did take a several stories before the link for one to the rest became clear, other than that it was easy to know that each story was linked to this collision and the resulting chaos and close to death moments. On every page, there is a countdown on the edge, whilst I didn't pay too much attention to this, it is a neat little way to show the countdown and as you get closer to zero, to see just how drastic the situation is.

This is a good addition to his "..... Minutes of Danger" series and will be enjoyed by anyone who's read the others.

It's been only months since Eragon first uttered "brisingr", an ancient-language term for fire. Since then, he's not only learned to create magic with words, he's been challenged to his very core.

Following the colossal battle against the Empire's warriors on the ... more...