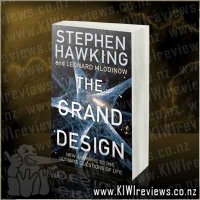 Disclosure StatementFULL DISCLOSURE: A number of units of this product have, at some time, been supplied to KIWIreviews by Penguin Random House or their agents for the purposes of unbiased, independent reviews. No fee was accepted by KIWIreviews or the reviewers themselves - these are genuine, unpaid consumer reviews.
Available:
October 2010

When and how did the universe begin? Why are we here? What is the nature of reality? Is the apparent 'grand design' of our universe evidence for a benevolent creator who set things in motion? Or does science offer another explanation?

In "The Grand Design", the most recent scientific thinking about the mysteries of the universe is presented, in language marked by both brilliance and simplicity. "The Grand Design" explains the latest thoughts about model-dependent realism (the idea that there is no one version of reality), and about the multiverse concept of reality in which there are many universes.

There are new ideas about the top-down theory of cosmology (the idea that there is no one history of the universe, but that every possible history exists). It concludes with a riveting assessment of m-theory, and discusses whether it is the unified theory Einstein spent a lifetime searching for. This is the first major work in nearly a decade by one of the world's greatest thinkers.

A succinct, startling and lavishly illustrated guide to discoveries that are altering our understanding and threatening some of our most cherished belief systems, "The Grand Design" is a book that will inform - and provoke - like no other.

For those who are comfortable with the high-brow physics, this is some highly appealing 'light reading'... for the rest of us, this is an entry-level primer into... well, literally the nature of the universe as we currently understand it. Or at least, how we *hope* it is, or else a lot of people have spent a lot of time doing something rather confusing, and pointless.

With a slow lead-in, you don't feel overwhelmed by the high-brow stuff as it slowly, but surely, gets into the deeper depths of reality's dimensionality. It subtly strips away our ideas of 'reality' as some immutable, never-changing static 'thing' that we live in, and instead plants the seed of the multiverse, perception-driven reality that we not only inhabit, but also shape in small but significant ways. And no, this book doesn't expound the 'mind over matter' theories offered in such presentations as 'What The Bleep?!' and 'The Secret', before you get worried about 'new-age' flummery. This is a quality publication from reputable expert sources.

Overall, though this book is all about some very 'brainiac' type stuff, it is presented in a fairly accessible and 'Joe-Bloggs-friendly' fashion... at least, at the start it is anyways. By the end of the book either you are hopelessly lost and starting to understand how a chronic dyslexic sees the literary world, or you have burned in a few new mental pathways and are seeing the world in a new light. It's one of those 'Love It or Hate It' type books that sometimes end up as hand-me-on gifts to those friends you feel are perhaps "...a tad book'ish at the best of times".