« My Name is Mr Fox review 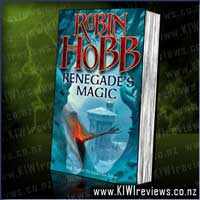 Disclosure StatementFULL DISCLOSURE: A number of units of this product have, at some time, been supplied to KIWIreviews by HarperCollins or their agents for the purposes of unbiased, independent reviews. No fee was accepted by KIWIreviews or the reviewers themselves - these are genuine, unpaid consumer reviews.
Available:
July 2007

When he was a boy, the magic of the Speck people - the strange dapple-skinned tribes of the frontier forests - claimed Nevare as their saviour, shaping him into a weapon to halt the Gernian expansion into Speck lands.

Until now Nevare has defied the magic, unable to accept his traitorous fate. But when they magic threatened the only loved-ones he had left, Nevare had no choice but to surrender to it.

When his efforts at seeking a peaceful solution fail, an exhausted Nevare can no longer suppress his ruthless Speck self, Soldier's Boy. He is determined to stop the Gernian expansion at all cost, and unlike Nevare, has no sympathy for his spirit-twin's world.

I've been eagerly awaiting the culminating novel of Robin Hobb's new series - The Solider Son trilogy, and as always with Ms Hobb's books, I read it with interest.
This book concluded the stories of both Nevare and Solider's Boy in a way that gave both of their stories the full weight they deserved... however this was not the most exciting of the three novels in this series.
I did thoroughly enjoy the conclusion of this series, but I think Ms Hobb's has written more intense and exciting conclusions for some of her other series.

The story starts with Nevare trying to stop the progress of the road and depleting all his powers to do this...
His Speck feeder Olikea returns to help Solider's Boy to regain his former glory and become the powerful magician that she believes he can be - along with her son.
They use Lisana's former treasures to build Soilder's Boy's magic and status amongst the tribes, and to try and stop the neverending dance that the Specks do to drive out the Gernians from their lands, a dance that may Specks believe is no longer working.
Soilder's Boy convinces the Specks to stand and fight, with disastrous consequences... for Soilder's boy that is. Nevare fairs better after the battle and strangely enough, everything seems to end well for all.

There are a lot of twists and turns, internal battles and fights of a more physical kind, however all these things straighten out and Nevare ends back on a course that he never thought he would see again.

I am glad I read this book, and it's a welcome addition to my book collection, but not her very best work in my opinion