ProdID: 8451 - Warrior of the Altaii
Written by Robert Jordan 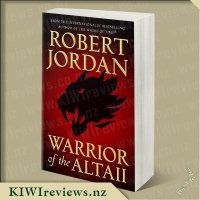 Disclosure StatementFULL DISCLOSURE: A number of units of this product have, at some time, been supplied to KIWIreviews by Macmillan Publishers Ltd or their agents for the purposes of unbiased, independent reviews. No fee was accepted by KIWIreviews or the reviewers themselves - these are genuine, unpaid consumer reviews.
Available:
October 2019

Warrior of the Altaii product reviews

As a young child, my nan used to take me to the library every week, and I'd read through 8-10 books a week. By the age of 13, I had finished reading nearly everything written by that point in Wilbur Smith's Courtney series. That series of seventeen novels were a staple of my formative years, and from then I moved onto the Ancient Egyptian series, and no matter how many other authors I had come across, nothing ever flowed quite as well as Wilbur Smith's style (especially when it comes to convincing world-building).

That is until I checked out this story from Robert Jordan. It flowed just as well as a Wilbur Smith's style, without feeling the need to over-sexualise the story. Jordan does a brilliant job in those opening chapters balancing the two components of introducing characters and places, and ensuring the story continues to move forward at a reasonable pace. With a new world, new races, new cities, new species, and new languages and traditions, there can often be a push to explain everything the first time it is mentioned. This is not the case in Warrior of the Altaii, where things will be mentioned and but explanations are left until later when it becomes important to the plot. It's an important skill to develop as an author to ensure you are overloading the reader with new terminology too early in the story, otherwise, you risk them getting lost in the amount of exposition, or getting bored because the pacing of the story has stalled completely.

Once I started the book, I finished within that first reading session. The narrative direction of the film is ambiguous enough to raise your curiosity, but also present enough to know the possible directions that the story could go. The only downside that came from the story is that I wish it was twice as long. There are so many elements that could have really benefitted from a bit more elaboration and plenty of lore that I would love to learn more about. But here is the clincher, this is a prequel to The Wheel of Time series, which is a fourteen volume series (so I know where I'm going to look to get my fix of this new world I've just discovered).

There is something invigorating about a new world, and Jordan has created one that feels so effortless and works with so few characters. If the idea of smart barbarians living in inhospitable plains, fighting against overwhelming oppression from a walled-in city sounds intriguing, then this will easily entertain and engage you. It's hard to find effective authors, and I'm really saddened to hear that Robert Jordan passed away over a decade ago, because he now has a new fan. Warrior of the Altaii combines the intriguing world of a JRR Tolkien series, with the engaging characters and gripping storytelling of Wilbur Smith.

I can't say much else. I do not want to ruin it. When I saw that this was actually the first novel he had written in this vein, I was hesitant, but the quality is impeccable and I can't think of anything to critique it on. I absolutely loved it.

A YA coming-of-age road trip novel about obsession, self-discovery, female power, and the people we meet along the way - by Costa Award shortlisted author Kit de Waal. The perfect read for anyone who's ever wondered where they came from and where they might be going next. De Waal responds to classic Moby Dick by tearing the power away from obsessive Captain Ahab and giving it to a teenage girl.