Home > Categories > Movies > Drama > A League of Their Own review

« The Blind Side review

ProdID: 3796 - A League of Their Own
Directed by Penny Marshall 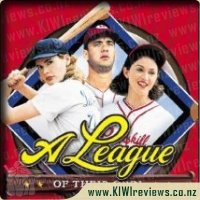 A League of Their Own product reviews

Two sisters join the first female professional baseball league and struggle to help it succeed amidst their own growing rivalry.

It's 1943 and the events of World War 2 threatens to end the came of Baseball. A candy magnate comes up with an idea to save Major League Baseball by creating all women teams. One man is sent out to recruit team members and finds Dottie and her sister Kit. Despite Dottie not being keen to go, and Ernie not keen to take Kit, all three set off so that the ladies can begin their training and play baseball.

There is plenty of drama in this movie as you have the women figuring each other out, between them and their coach, the concerns for those married who's husbands are at war and of course, the main drama between Dottie and her younger sister Kit. There are a few laughs as well, some good moments, a heart-wrenching moment or two as well.

This is one of the very few 'based on fact' movies that I have enjoyed and also own. The banter between characters is wonderful and you really feel for these characters. Well worth watching at least once.

Princess Vespa, whose hairstyle surely ranks as one of the universe's oldest creations, is kidnapped by the evil Dark Helmet. But fear not! Lone Star and his half man, half dog sidekick ... more...