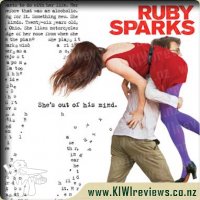 Ruby Sparks is a 2012 romantic comedy-drama film written by Zoe Kazan and directed by Jonathan Dayton and Valerie Faris. It stars Paul Dano as a struggling novelist whose fictional character, Ruby Sparks, played by Zoe Kazan, comes to life

Calvin is a writer who has hit his writers block. He starts to dream of a beautiful young woman and she becomes his muse. He begins to write a tale of Ruby Sparks only to one day find her, downstairs in his house, very, very real.

Calvin is a bit odd. He has no friends, really only spends time with his brother and has no woman in his life at the current time. He's an awkward kind of guy who wants love, but just doesn't seem to get along well with too many people, and most women he's met only want one night with him so they get to boast about sleeping with a genius author.

Ruby is this outgoing woman, who doesn't always know where she's going, and she is a delightful character. The acting feels raw at times and so feels very very real. Paul and Zoe have great chemistry on screen and act their parts superbly. This was such a fun film to watch. It's full of laughs, love and drama, everything you need in a good movie, but it's also a bit of an oddball, and pulls it off so very very well.

I would highly recommend this film if you want a romance movie that's a little bit odd and a little bit different. Well worth the couple of hours viewing time.

A classic drama about a young, orphaned country girl, Fanny Hill, falls into prostitution and works her way up the social ladder of bawdy 18th Century London.

Based on the classic novel by John Cleland, Andrew Davies, the award-winning script writer, (Pride and Prejudice, Dr Zhivago, Bridget Jones's Diary, Tipping The Velvet), brings his good humour and naughty wit to a plot which is a seductive rollercoaster of youthful ... more...