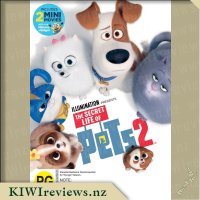 Disclosure StatementFULL DISCLOSURE: A number of units of this product have, at some time, been supplied to KIWIreviews by Universal Pictures NZ or their agents for the purposes of unbiased, independent reviews. No fee was accepted by KIWIreviews or the reviewers themselves - these are genuine, unpaid consumer reviews.
Available:
25th September 2019

Illumination founder and CEO Chris Meledandri and his longtime collaborator Janet Healy will produce the sequel to the comedy that had the best opening ever for an original film, animated or otherwise. THE SECRET LIFE OF PETS 2 will see the return of writer Brian Lynch (Minions) and once again be directed by Chris Renaud (Despicable Me series, Dr. Seuss' The Lorax).

I have seen The Secret Life of Pets a few times now and it wasn't one that I particularly enjoyed nor cared about enough to want to see a sequel, but as seems to be the thing now, a sequel came along. We get a quick look at the start of Max and the others now, and then a speedy look at the growth of his family as his owner falls in love, gets married and along comes baby. By the time we get into the story the child is a toddler and Max is stressed to the max trying to protect the child. Snowball is a much more mellow character now that he knows what the love of a human child is but still a bit cuckoo as he declares himself a superhero for animals. Throw in Gidgit trying to get back Max's ball and you have three stories that are fun and converge well, albeit in an unbelievable way.

I found Max's story to be sweet, it is also your usual play on finding your inner strength and becoming braver than you were. Gidgit's story was fun as she attempts to learn how to be a cat so she can enter the apartment full of cats to regain Max's ball. Snowball was the character I most enjoyed this round, which was funny as in the first film I liked him the least out of everyone. Here he joins a dog in attempting to save a young tiger cub (one of the animals that can't talk in the film, a little perplexing I found) from an abusive and cruel circus owner, his scenes provided the most fun and enjoyment for me. I also love, at the end, when he gets a change of outfit and shouts "I love it!!!", a moment a few years ago that would have gone rather differently.

A films soundtrack is something that really grabs me, more often than not there is at least one song from a kids film that I add to a playlist on Spotify, but I found this soundtrack to be entirely unmemorable, nothing had me taping my toes, wanting to find the lyrics or even just listen to once more, a big shame. The animation and special effects were as good as the previous film, another well done film when it comes to that. The storyline was so-so, it felt like they really wanted a spin-off for Snowball but didn't have enough for a film of his own so threw in Max and the gang. My kids did enjoy this, they've watched it twice with me and a few times on their own, as for me... I'm not worried about seeing it again.