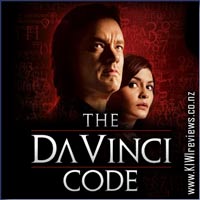 While in Paris on business, Harvard symbologist Robert Langdon (Tom Hanks) receives an urgent late-night phone call: the elderly curator of the Louvre has been murdered inside the museum. Near the body, police have found a baffling cipher. While working to solve the enigmatic riddle, Langdon is stunned to discover it leads to a trail of clues hidden in the works of Da Vinci - clues visible for all to see - yet ingeniously disguised by the painter.

Langdon joins forces with a gifted French cryptologist, Sophie Neveu, and learns the late curator was involved in the Priory of Sion -- an actual secret society whose members included Sir Isaac Newton, Botticelli, Victor Hugo, and Da Vinci, among others.

In a breathless race through Paris, London, and beyond, Langdon and Neveu match wits with a faceless powerbroker who seems to anticipate their every move. Unless Langdon and Neveu can decipher the labyrinthine puzzle in time, the Priory's ancient secret - and an explosive historical truth - will be lost forever.

I never read the DaVinci Code when it came out, I heard a lot about it as my catholic school was banning it from our school library and being a librarian at the time I heard about it. I never did get around to reading it, but my mum and I went to it when it came out in the cinemas.

I am a big Ron Howard fan, since his days as an actor on Happy Days, to his directing movies such as Willow and others. Add in Tom Hanks, a puzzle and religion not being straight and forward I was more than happy to watch this (and now own it).

I love puzzles and so enjoyed the puzzle like quest that Langdon and Sophie go on to find the answer to one of the big questions that hangs around religion, did Jesus have any children of his own and what happened to Mary's body? There are, of course, bad guys, and I liked that I didn't know who one of the bad guys was (a benefit of having not read the book first).

I really enjoyed this movie, and own it, so was VERY happy when they made a second with Ron Howard directing again.

I loved reading the book, Dan Brown really knows how to captivate his reader, as this movie also did. I have little background knowledge on religion, so perhaps this is why this appeals to me and i can fully indulge in the story line.

Tom Hanks does a fantastic job as the lead. The film spans around Europe, it is fast paced, so ensure you pause when you leave the room! The film left me wanting more and more so i purchased additional material on it. I loved seeing the architecture and the art and i felt like i was visiting the places alongside the characters. I really loved the cinematography that was put into the film.

I would recommend this film, but advise to read the book first - as usual you get a lot more from the book, but the film does not disappoint. I loved seeing the difference in interpretation from reading it to watching it.

Quick and simple... if you have read the book and have a good imagination, you've already seen the movie, in your head... and probably it was better than what I saw on the big screen. If you prefer to indulge in someone else's imagination, or are not a big book fan, then you might find this movie to be worthwhile...

Anthony Hopkins stars as Burt Munro, a man who never let the dreams of youth fade. After a lifetime of perfecting his classic Indian motorcycle, Burt set off from the bottom of the world to test his bike at the Bonneville Salt Flats in Utah.

With all the odds against him, he set a new land speed record for motocycles under 1000cc, and captured the spirit of his times. Burt Munro's 1967 world record remains unbroken and his legend lives on today.