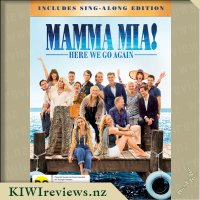 Disclosure StatementFULL DISCLOSURE: A number of units of this product have, at some time, been supplied to KIWIreviews by Universal Pictures NZ or their agents for the purposes of unbiased, independent reviews. No fee was accepted by KIWIreviews or the reviewers themselves - these are genuine, unpaid consumer reviews.
Available:
October 2018

The first Mamma Mia film got watched and rewatched so many times when my eldest was a toddler, it was his favourite movie at the time, now as an eleven year old he isn't as enthused about the film but I have two other children who still love it, so seeing this was a must. In Here We Go Again, we split between young Donna as she makes her was to Kalokairi and meets Sam, Bill and Harry and Sophie as she attempts to have a grand re-opening of the hotel. Flipping through the two time periods, this is still very much a Donna tale but it is nice that it isn't solely a prequel story and we get to see Sophie and her work on the island.

When it comes to the soundtrack, it is just as good as the last time, bringing in some old favourites but also a few lesser known songs from the hit band ABBA. The songs all fit perfectly, except for one in the very end of the film which really just felt like "hey, we love this song, lets find a way to add it in", at least it was sung well (Cher is a fab singer) and tagged on the end wasn't as bad as it could have been if shoved somewhere in the middle. It was great fun seeing young Donna and Lily James did a great job of portraying the younger version, even adding in a few little mannerisms that she thought Donna would be doing her whole life (such as her little dance in the dungarees).

The casting was one of the highlights of the film, I've watched many films where the younger version isn't 100% believable but my mum and I agreed that the young versions of Donna, Bill, Sam, Harry, Rosie and Tanya were perfect matches to their older counterparts. At the end of the film there is a dance number that is simply there for fun, not for storyline, and we get to see the young and old counterparts side by side, singing and dancing. One thing I love about this final dance scene, is that as per the special features, each pair of characters were sent off on their own for a short time to create their own little dance together, which I think is a fab way of doing it.

The special features give us a couple of deleted songs, you can see where they fit in but I do agree with the directors that they weren't quite right for the flow of the film as a whole. There is a clip about the costume design, Cher joining the cast and the required songs with lyrics (so if you want to sing to each song without watching the film, you can) and they have fun little differences so it isn't just plain, boring wording, it is fun, like the film. I thoroughly enjoyed this film, everything was done really well and it's just such a fun movie to watch.

It's 1947 Hollywood and Eddie Valiant (Bob Hoskins), a down-on-his-luck detective, is hired to find proof that Marvin Acme, gag factory mogul and owner of Toontown, is playing hanky-panky with femme-fatale Jessica Rabbit, wife of Maroon Cartoon superstar, Roger Rabbit. When Acme is found murdered, all fingers point to Roger, and the sinister, power-hungry Judge Doom (Christopher Lloyd) is on a mission to bring Roger to ... more...