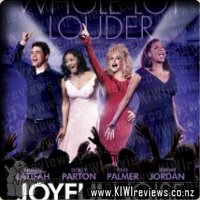 The small town of Pacashau, Georgia, has fallen on hard times, but the people are counting on the Divinity Church Choir to lift their spirits by winning the National Joyful Noise Competition. The choir has always known how to sing in harmony, but the discord between its two leading ladies now threatens to tear them apart.

Their newly appointed director, Vi Rose Hill (Latifah), stubbornly wants to stick with their tried-and-true traditional style, while the fiery G.G. Sparrow (Parton) thinks tried-and-true translates to tired-and-old. If these two strong-willed women can overcome their differences and find a common voice, they and their choir may make the most joyful noise of all.

This is a good movie, despite the description, in my opinion, being a bit misleading. Whilst there is indeed friction between Vi and G.G, the story focuses a bit more on Vi's daughter than any other character.

Vi has been a single mum for two years to her teenage children, her daughter, Olivia and her son, Walter, who has Aspergers. G.G. has just lost her husband, who led the choir, and out of the blue her teenage grandson, Randy, comes to stay with her. The story centres on the romance blossoming between Olivia and Randy, as well as the growth of the choir and Olivia's relationship with her mother, Vi. As Olivia and Randy's relationship grows, so does the tension and problems at home.

There are some great musical renditions in the film, I especially enjoyed 'Man in the Mirror' and the medly that the choir performs during the film. This was a nice movie, had some good laughs where needed and some great relationship development. My only issue with it was all the 'God' talk, it is understandable as it was a church choir, but for me it could have done with just a little less.