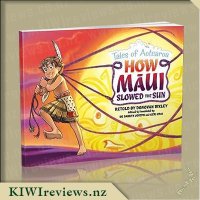 Disclosure StatementFULL DISCLOSURE: A number of units of this product have, at some time, been supplied to KIWIreviews by Upstart Press or their agents for the purposes of unbiased, independent reviews. No fee was accepted by KIWIreviews or the reviewers themselves - these are genuine, unpaid consumer reviews.
Available:
September 2019

Tales of Aotearoa - 2 - How Maui Slowed the Sun product reviews

Darryn Joseph ensures that the story is accurate and culturally appropriate.

Being an adopted Kiwi myself, traditional Maori tales are not something which I am really familiar with. However, having a daughter who loves reading and who goes to Kindy, I am finding that she really loves to engage with many of them. In particular, one that she had told me about is 'How Maui Slowed the Sun'. I had had a quick look at an original version of the book in the library, and the illustrations, whilst being beautiful, aren't overly captivating or engaging for a younger audience. So, when I saw this version of the book by Donovan Bixley I jumped at the chance to review it, and to hopefully teach me something new too.

From the outside of the book, you can clearly see that it has a focus on making these stories more attractive to today's youngsters. The picture is more of a 'comic' style, and I can see lots of young ones imagining themselves as Maui- showing their elders how it is done.

The tale itself, from what I understand, follows the same course as the original. Maui is upset that he can't get everything done in the day that he would like to (and what child hasn't felt like that before), so he decides to slow down the sun using a net. The tale flows well, and is careful to remain faithful to the key focus of the original story. However, some of the words have been updated to make it suitable for a slightly younger audience, and the violence (the hitting of Tama-nui-te-ra) has been removed, which I was really happy about.

I really loved the humour included within the book, and this definitely makes it suitable for a much wider variety of ages. Most of this is included within the pictures, which are really colourful and engaging in themselves. My daughter has really clicked with the book, and loves pointing out lots of the detail within the pictures whilst we are reading it. She also loves acting out some of the scenes within it- a sure sign of a hit book in our house!

What a fantastic reimagining of the original book to bring it more up-to-date for a modern audience. Great pictures, appropriate use of humour and quirky Kiwi lingo all help to make this a classic book which you will not be sorry you bought. I have loved learning the tale, and I'm sure we will be reading it for years to come. 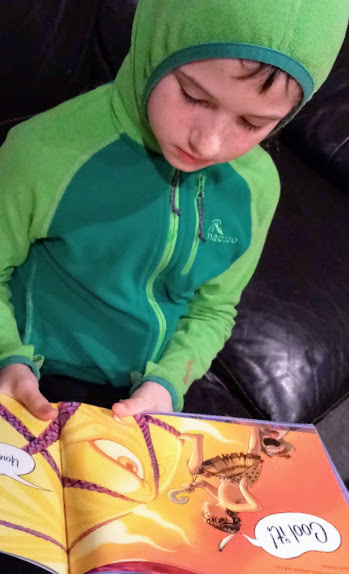 What a find! I showed How Maui Slowed The Sun to Miss Seven, thinking she might enjoy it but that it would be too young for Mr Nine. My mistake! While Miss Seven and I read it together, he could not resist it - he spent the entire time hovering behind, looking over my shoulder at the pictures and giggling along with us at the funny bits. Both of them already knew the legend, but they loved the modern take on it with the kiwi vernacular coming through vigorously in the speech bubbles! At the same time, the language is not dumbed down - although it is accessible to a seven-year-old, it is not written in little-kid language. I think that is why Mr Nine enjoyed it too.

Having read the story twice, we talked about Miss Seven's reactions. She was 100% impressed, to the point that she decided the rest of her class needed to hear it too. So she asked if I would come to school with her and read the story to them. I explained that, although I was happy to do that, it might be a good idea to check with her teacher first! I was collecting the children from school the following afternoon, so I asked her to introduce me to her teacher - and from there on it was all go. The teacher was happy to have a visitor, so we organised it for a suitable day and time the following week.

I was greeted by around 25 children, all sitting on the mat ready for their story. Miss Seven held the book and showed the pictures while I read the story - she already knew it almost by heart, so this was an easy collaboration. There followed around fifteen minutes of total concentration as the children were drawn in by the magic of the words. I stopped occasionally to ask a question, and then there was an explosion of arms as they all wanted to answer at once! Everyone was fascinated; the story was at just the right level for them, and clearly they were revelling in the experience. We unpacked the Maori words as they occurred; some of the children already understood them, and were keen to share their knowledge.

After we had finished reading, I asked some questions. One of the favourites was about bossy big brothers. That was a success - they all knew what that was about, although a few volunteered a bossy older sister, or even a younger one! Lastly, the class teacher asked what they had enjoyed most. The thing that impressed them most was the artwork. They just loved the vibrant pictures! I think Donovan Bixley's skill with both words and pictures is going to be an inspiration for these youngsters, hopefully for a very long time.

One day, Tana, Scotty, Zinnia, Andrea and Muzza are zapped by lightning on a footy field and transformed into a team of POWERED-UP heroes known as THE INVINCIBLES. But the clock is ticking - they have 80 minutes before it's game over and their powers vanish!

So when Tricky Ricky hatches a sinister scheme to ruin the reputation of the mighty national team, the All Greats, it's The Invincibles alone who can save them. Can the ... more...