« Kia Ora You Can Be A Kiwi Too! review 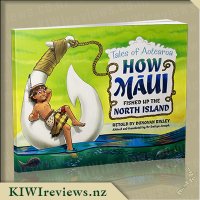 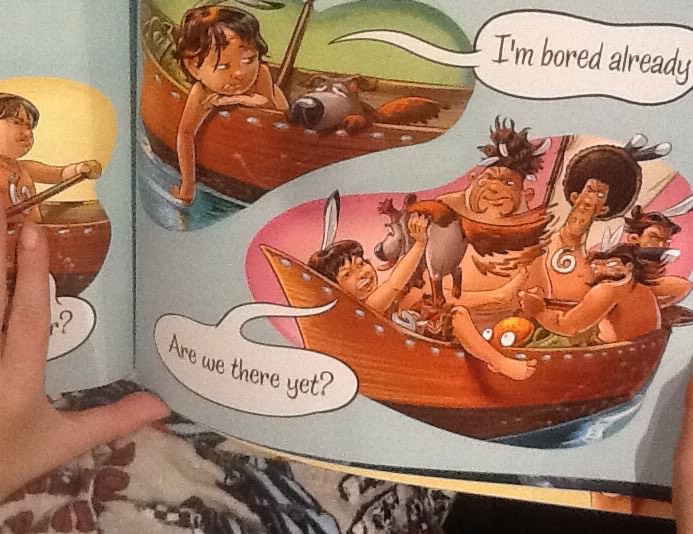 This was one of those books that did not quite end up where I had intended! I thought it would be ideal for our twins, but stopped on the way to show it to Miss Six and Mister Eight, and at their request I read it to them first. That was fatal. Their mother overheard us, became intrigued to the point where she had to sit down and listen too, and then asked if SHE could keep it as it would be ideal for the class of six- and seven-year-olds she would be taking next week. She had been looking for a suitable book to read to them, and this one would be perfect.

I like the way that the educational aspect of the book is embedded in a fun, accessible narrative. It is a legend retold for young children, with the added bonus of a glossary of Maori words in the inside front cover plus the information on the traditional Maori view of Aotearoa at the very end of the book. There are two distinct narrative styles; the descriptive passages are all written in formal language, but the direct speech is informal, with lots of Maori words included. There is also a generous amount of typical kiwi slang. Maui's brothers refer to him as an "egg" when he is whingeing in the boat, they describe their daily catch as "mean-as", and they refer to one another as "yous fullas".

There is lots of good-natured teasing, which young children will relate to; Maui is the youngest and smallest of the brothers so is often their target. However, he is also a trickster: annoying, but well able to hold his own! Even at this level, it quickly becomes apparent that Maui is the strongest and the most capable of all the brothers. After all, what kiwi adult has not heard of the accomplishments of Maui? They are an integral part of the legends of Aotearoa. But at the same time, who can remember his brothers' names?

The favourite page for all of us was near the middle of the book, where young Maui asks "Are we there yet?" All parents - and kids! - are familiar with this mantra which can drive the calmest driver (or sea captain) to distraction. To see it featured in a legend like this really makes the reader empathise with the main character. Maui is suddenly presented as a cheeky, whingeing little kid just like any other - he is firmly on the reader's wavelength!

We all loved the illustrations. They are colourful, evocative of what many might imagine Hawaiki to have been, with the outrigger canoe, sea, trees and volcanoes all featured prominently. Maui and his brothers all wear piupiu and each has a different carved bone taonga round his neck and individual hair decorations made of feathers. Unlike his brothers, however, Maui is not yet old enough to have a facial moko. This shows he is still just a child. We found the illustrations were so detailed that it was possible to follow the story without looking at the words at all!

And the twins? Well, it looks as though I will have to go and buy another copy for them, because it is unlikely that they will get to see this one. So much for good intentions!

Six super powers in six days! It's Montague to the rescue!

Ever wanted to fly? Or have super strength? Maybe you wish you had laser vision that could burn holes right through walls, or the power to become invisible? Montague Towers has to solve the crime of the century and hunt down an evil criminal mastermind. But how can he do that when he's just a normal boy? That's where the Cape of Justice can help.