ProdID: 4071 - The Dead and Buried
Written by Kim Harrington 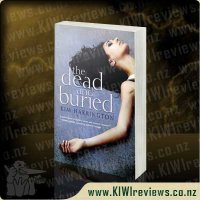 Disclosure StatementFULL DISCLOSURE: A number of units of this product have, at some time, been supplied to KIWIreviews by Scholastic (NZ) or their agents for the purposes of unbiased, independent reviews. No fee was accepted by KIWIreviews or the reviewers themselves - these are genuine, unpaid consumer reviews.
Available:
April 2013

The Dead and Buried product reviews

A haunted house, a buried mystery, and a very angry ghost make this one unforgettable thriller. Jade loves the house she's just moved into with her family. She doesn't even mind being the new girl at the high school: It's a fresh start, and there's that one guy with the dreamy blue eyes... But then things begin happening. Strange, otherworldly things. Jade's little brother claims to see a glimmering girl in his room. Jade's jewellery gets moved around, as if by an invisible hand. Kids at school whisper behind her back like they know something she doesn't.

Soon, Jade must face an impossible fact: that her perfect house is haunted. Haunted by a ghost who's seeking not just vengeance, but the truth. The ghost of a girl who ruled Jade's school until her untimely death last year. It's up to Jade to put the pieces together before her own life is at stake. As Jade investigates the mystery, she discovers that her new friends in town have more than a few deep, dark secrets. But is one of them a murderer?

This is the best book I have read in a long time I was so gripped by this story and wanting to find out what happened next that I couldn't put the book down. Although it is a young adult book I think it could be enjoyed by adults too as it really is a great read.

The story line of a haunted house and a ghost that was just a wee bit evil both in spirit form and before her death was so gripping, as you wanted to find out more about her as a live person to find out why someone would of wanted to kill her. I had it figured out in my mind pretty early as to who did it which made me want to keep reading to find out whether I was right as there were so many possibilities and other people that it could of pointed too.

It really was a great mystery and the author did well at keeping you guessing by adding new suspects and motives along the way. The other thing that was good was the romance along the way which was really well written in to the story so not only did you want to keep reading to solve the mystery but you wanted to keep reading to see what happened with the emerging romance.

I think this is a great teen romance/mystery novel and I would happily let my daughter read this as although it has slight adult themes they are not gone in to in great depth and there is no direct sexual references or swearing. All in all I really loved this book and would happily read it again.

While visiting her grandfather, a little girl knows that something odd is going on but she just can't quite work out what it is.