« Tales of Aotearoa - 2 - How Maui Slowed the Sun review

My Little Pony: The Movie review 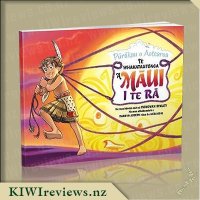 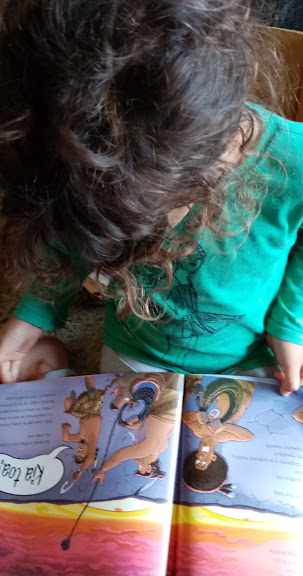 I am lucky to have family members and friends who are committed to bringing their children up bilingual. It is a pleasure to share books in Te Reo that have been written especially for little ones, who may have seen them at their kura or kohanga but have not had as many available at home. It is wonderful to see New Zealand publishers recognising the need for more quality publications in both languages.

What I especially liked about Te Whakatautonga a Maui I Te Ra was the way in which the story was told in two complementary formats - the story proper, which was suitable for older children, and the pictures with their bubbles which made the story accessible for really small children as well. I had intended the book for the twins, who are old enough to listen to the story and understand it, but when I arrived their little brother was the only one at home. He was sitting in the car watching his father and koro tinker with the engine, so I joined him in the back seat and we looked at the book together. I did not read the story proper; we looked at the pictures and I read the speech bubbles to him. That was enough for him to follow what was happening.

Once the three girls arrived home, I was able to read the story properly to them. The twins are fluent so were able to follow easily. They already knew about Maui, but loved the colourful illustrations and thought he was very lazy when he let his brothers do all the work. We were slow to start reading because they were fascinated by the line drawings and the names of the various creatures on the inside cover, and got very excited when they found te ra and te marama. They also recognised te tuatara although they insisted it was a taniwha, and te wharenui! The twins' younger sister cannot read yet, but she made a good effort at naming the items anyway. She is bright and quite assertive, so although she is 18 months younger, she is determined to do anything the twins can do!

We had some giggles over the part where the brothers all laughed at Maui and te tuakana tuawha told him the sun's rays would burn his nono, and again when te tuakana tuarua told te tuakana matamua that he had stinky feet. These are exactly the sorts of things that the children might say to each other so they could relate to them.

I liked the translation by Darryn Joseph and Keri Opai; it captured the essence of the English version without being too rigid. The language was accessible to the children, and the story length was just right. Given that it was the end of a long day, they were tired so a longer story might have needed to be delivered in instalments. As I left, they were asking me when there would be another book in the series!

Join Thea Stilton and the Thea Sisters on this adventure packed with mystery and friendship!

The Thea Sisters are in Kenya on a photo safari! The mouselets love exploring the magnificent landscape and learning about the animals on the reserve they're visiting. A lion cub has just been born, but while they're there, he's kidnapped! It's up to the Thea Sisters to rescue him in an adventure across the savanna.