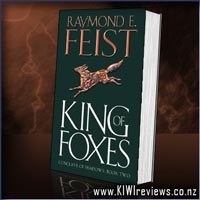 Disclosure StatementFULL DISCLOSURE: A number of units of this product have, at some time, been supplied to KIWIreviews by HarperCollins or their agents for the purposes of unbiased, independent reviews. No fee was accepted by KIWIreviews or the reviewers themselves - these are genuine, unpaid consumer reviews.
Available:
April 2005

Two of the culprits are already dead by his hand, but Tal will not rest until he uncovers the reason for the murders and punishes their architect. But the Conclave demands its membership price: he must investigate Leso Varen, a magician of terrible power. To do this means service with the sorcerer's master, Duke Kaspar of Olasko. He must swear loyalty to the very man he suspects of slaughtering his family, even if it means tracking down the Duke's enemies - the members of the Conclave and Talon's own friends.

This was my first introduction to the writing of Raymond E. Feist and I found myself thoroughly engrossed from the first page. Although this book falls within a series, the style of writing and structure of the storyline ensured an enjoyable read.

The primary character, Talwin, and his search for vengeance made the story flow well and gave me the incentive to seek out earlier books in the series to see how he came to this point in his life. The story, with its theme of vengeance and violence, was tempered by the style of delivery which combined humour and realism into a story that held my attention. The use of other characters from previous books and their interactions with the main character piqued my interest without detracting from the main storyline.

Feist's style of writing should appeal to a diverse range of readers. His use of medieval themes, humour and other-worldly locations would find a welcome audience with a varied age range. I found this book so enjoyable and difficult to put down, it spurred me toward searching out his earlier works.

Cheeky Putangitangi the paradise shelduck is looking for her friend. What will she do when she finds him? A fun rhyming story about two playful little ducks - and a frog!

This is a lovely story about the simple pleasures of life. The cute and colourful illustrations by the author include a little frog that children will enjoy pointing out on each page spread.

The short sentences and rhyming text will make this a favourite book for pre-schoolers and beginner readers.